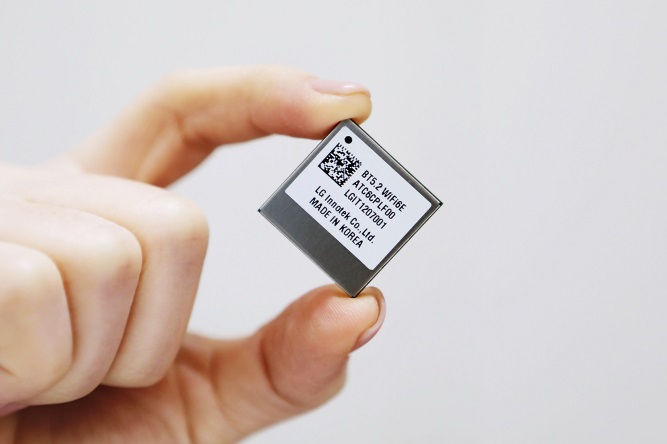 This photo provided by LG Innotek Co. on March 2, 2021, shows an automotive Wi-Fi 6E module developed by the company.

The company said it expects to commercialize the Wi-Fi 6E module in 2022.

The module combines a communications chipset, a radio frequency circuit and other components.

Such communication performance will deliver seamless connectivity to passengers, allowing them to enjoy high-definition movies and games on the in-vehicle display or audio system, according to the company.

LG Innotek said the product also boasts enhanced durability as it can withstand temperature changes between -40 degree Celsius and 85 degree Celsius. It was developed with a larger synapse surface design to cope with repeated shrinking and swelling.

The company added its automotive Wi-Fi 6E module also has a small and slim form factor and is compatible with existing modules.

With the latest product, LG Innotek said it eyes to become a leading company in the automotive communications component market that is currently dominated by Japanese firms.

To achieve its goal, the company said it will actively target auto parts suppliers in North America, Europe, Japan and China. It also plans to do joint promotions with Germany’s Infineon Technologies AG that supplies Wi-Fi 6E automotive chipsets.