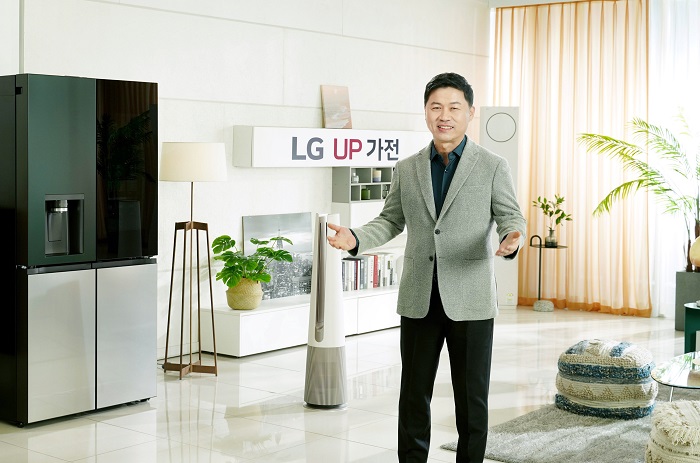 Ryu Jae-chul, head of LG Electronics Inc.’s home appliance and air solutions division, explains the company’s plan to introduce upgradable appliances, in this photo provided by the company on Jan. 25, 2022.

SEOUL, Jan. 25 (Korea Bizwire) — LG Electronics Inc. said Tuesday it will roll out upgradable home appliances to better serve consumers’ varying needs, in what it said could be a major shift from selling products to offering improved consumer experiences.

The tech giant said users will be able to easily update their home appliances through the smart home ThinQ application to install new features, without having to buy a whole new product.

LG said it will initially roll out six upgradable products, including dryers, refrigerators and dish washers, and expand the lineup of its UP appliances to 20 this year, with an ultimate aim to make every LG product upgradable in the future.

The upgrades will be made based on consumer behavior, big data and consumer feedback, the company said, adding it will be available through software updates and through installing accessories and modular equipment in existing appliances.

The goal of LG’s new plan is to “offer new consumer experiences with products that become smarter, newer and more comfortable as time goes by,” Ryu Jae-chul, head of LG’s home appliance and air solutions division, said during a press conference Tuesday.

While he does not know whether the plan will extend products’ life cycles or not, the company will “go ahead with it to deliver new value to customers, which we believe will ultimately help boost our business,” he said.

“While the exact data has yet to be announced, I think it will be more challenging to keep the top spot than rising to the top,” he said.

“Maintaining the way we have been doing business and continuously making innovative products might not be enough” to keep growth momentum, he said, adding the plan is part of LG’s efforts to shift the paradigm of communicating with users in order to deliver new value that they need.

The company’s fourth quarter earnings will be released Thursday.