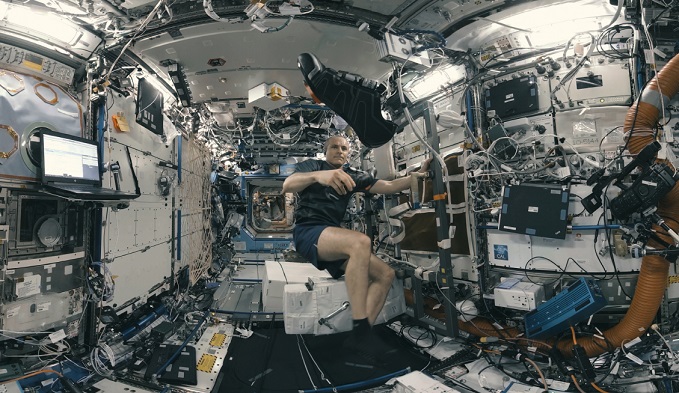 A scene from the VR series “Space Explorers: The ISS Experience” is shown in this photo provided by LG Uplus Corp. on Oct. 22, 2020.

“Space Explorers: The ISS Experience” follows the daily activities of the astronauts all in VR and is produced by Canadian VR developer Felix & Paul Studios, a member of the Global XR Content Telco Alliance, and TIME Studios.

It is the first 3D VR content to be filmed in space, according to LG Uplus.

The carrier said the studio also collaborated with the International Space Station U.S. National Laboratory and the U.S. National Aeronautics and Space Administration (NASA) for the project.

The series is available globally through telecom operators that are part of the VR alliance, which launched last month and also funded the project.

The four-part series is available for South Korean viewers through the LG Uplus’ VR application.

The alliance, currently headed by LG Uplus, is made up of global mobile carriers, including Bell Canada, Japan’s KDDI and China Telecom, as well as U.S. chipmaker Qualcomm Technologies Inc. and another VR developer, Atlas V.

The South Korean carrier has recently boosted its involvement in VR and augmented reality (AR) technology.