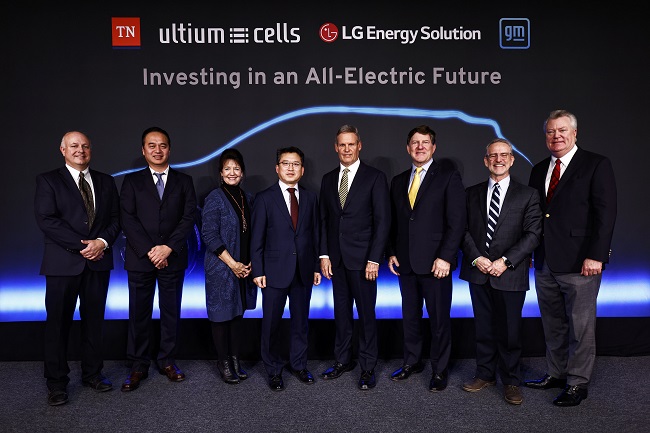 Officials from Ultium Cells LLC, the joint venture between LG Energy Solution Ltd. and General Motors Co., join Tennessee Gov. Bill Lee (5th from L) and other guests for the announcement of the additional US$275 million investment in the battery manufacturing plant in Spring Hill, Tennessee, in this photo from Ultium Cells’ website on Dec. 3, 2022.

The additional investment by Ultium Cells LLC will help expand the facility’s output by more than 40 percent, to 50 gigawatt hours from the initial 35 GWh, once the plant, aiming for completion in late 2023, is fully operational, according to its website on Saturday.

The Tennessee plant will supply battery cells to GM’s assembly plant in the same city for production of the Cadillac LYRIQ and other EVs, the company said.

The Tennessee plant is one of the battery cell manufacturing sites being built by LGES and GM, besides the ones in Ohio and Michigan.

They also plan to build a fourth plant in an undecided location.

Ultium Cells is pushing to boost the production capacity to 130 GWh upon the start of full production at all three facilities.