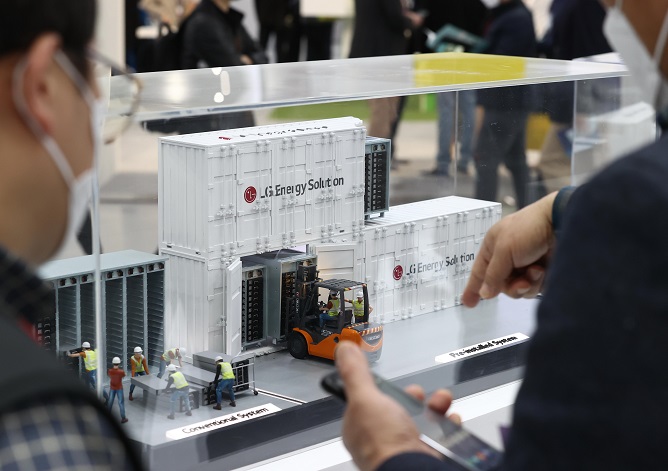 Visitors take a look at a model mobile energy storage system (ESS) on display by LG Energy Solution Ltd. at a battery exhibition in southern Seoul on March 17, 2022. (Yonhap)

It has launched KooRoo to take the lead in battery-as-a-service (BaaS), primarily focusing on the development of electric vehicle battery packs fit for replacement instead of charging, the South Korean battery maker said.

Battery swap service is emerging as a new business model for battery manufacturers, as demand from EV owners for a subscription- or lease-based battery management service is projected to grow as EV purchases will increase with the global electrification drive.

The service also brings convenience for EV users, as changing depleted car batteries with fully charged ones would take only a few minutes, and helps dispel the “range anxiety,” or a driver’s fear over insufficient fuel or battery capacity.

Another in-house company, named Avel, will focus on the energy storage system (ESS) to boost its ability for accurate measurement and efficient management of energy use, in a broader push for energy-as-a-service (EaaS) business, LGES said.

The two entities will operate independently under the leadership of a chief strategy officer.

The launch of the in-house companies came after LGES, the world’s No. 2 player, announced plans to bolster the BaaS and EaaS sectors as future businesses.

LGES CFO Lee Chang-sil said in the July earnings call that it was preparing the BaaS business, citing battery swap service for two-wheelers as an example.