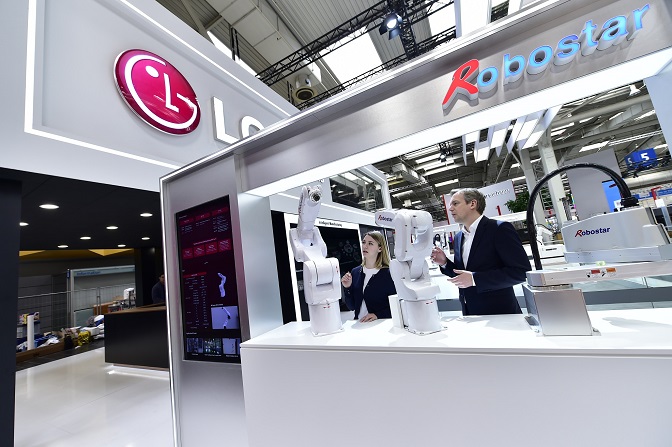 Robostar Co.’s robots are displayed at its booth at the 2018 Robot World exhibition held in KINTEX near Seoul. (Yonhap)

SEOUL, Nov. 23 (Korea Bizwire) — LG Group’s robot business, for which Chairman Koo Kwang-mo made active investment after picking it as one of the group’s future cash cows, is finally showing signs of improvement in its financial performance.

Robostar Co., a robot manufacturing subsidiary of LG Electronics Inc., posted a consolidated revenue of 39.68 billion won (US$29.4 million) and operating profits of 1.08 billion won in the third quarter of this year, reducing cumulative deficits to 185.04 million won.

If this trend continues, the company is expected to be profitable this year.

Robostar suffered operating losses of 683.79 million won and 583.25 million won, respectively, in the first and second quarters of this year.

After being acquired by LG Electronics in 2018, Robostar showed a downward trend in financial performance primarily due to the accumulated deficits of its subsidiary Robomedi Co.

However, as the global robot market has been growing at a blistering pace in recent days, Robostar’s financial performance is now on a recovery track.

LG recently stepped into foreign robot markets by supplying its CLOi ServeBot to restaurants and stores in the U.S. and Japan.