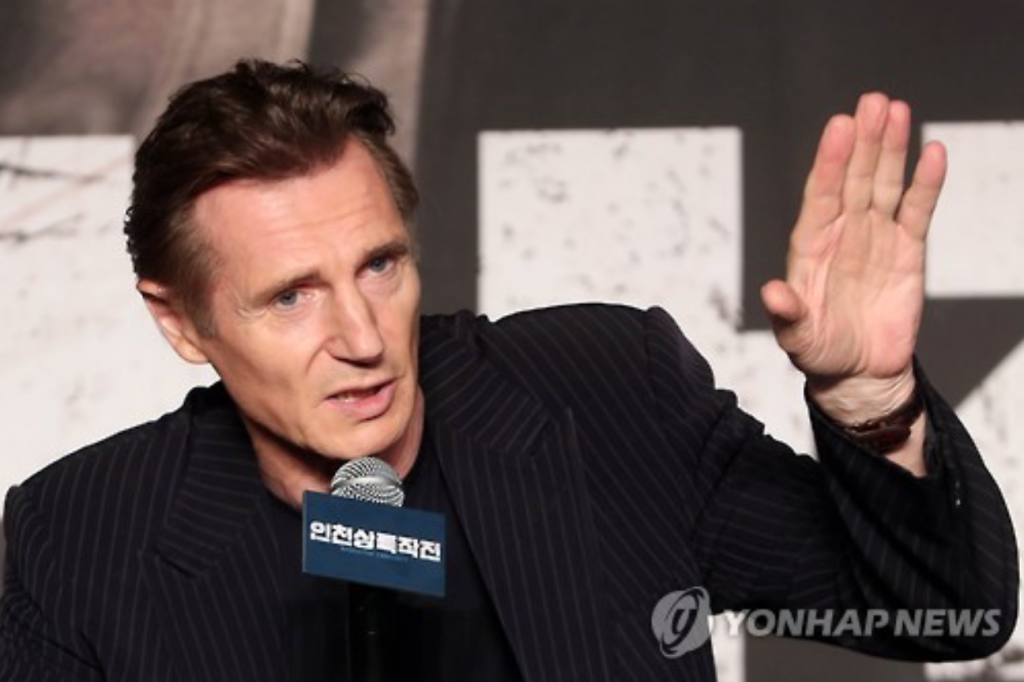 “General MacArthur was so charismatic that he often faced conflict and confrontations. And it was a great privilege to portray such an unpredictable yet alluring character,” he added. (image: Yonhap)

SEOUL, July 13 (Korea Bizwire) – The Korean War broke out with Soviet-backed North Korea invading its southern neighbor in the early morning of June 25, 1950. In just three days, Seoul was captured, and by September 1950, North Korea had pushed its forces down to the Nakdong River, controlling about 90 percent of the peninsula. South Korea was in the brink of destruction.

But then came the Battle of Inchon, an amphibious invasion that resulted in a decisive victory and strategic reversal in favor of South Korea and its United Nations allies. The battle was led by American General Douglas MacArthur.

The upcoming Korean War blockbuster, Operation Chromite, is loosely based on the battle, and Liam Neeson plays the infamous general. ‘Operation Chromite’ was the actual code name used for the operation.

“I was extremely nervous about reenacting one of the most honored war heroes in Korea,” said Neeson during a press conference held at the Conrad Seoul hotel on Wednesday.

According to Neeson, both his interest in the Korean War and the character of general MacArthur led him to take on the role in the film.

“General MacArthur was so charismatic that he often faced conflict and confrontations. And it was a great privilege to portray such an unpredictable yet alluring character,” he added.

The actor also complemented the script, which he said was both “exciting and easy to understand”, and noted that it was the scene where MacArthur agonizes over whether to execute the operation that made him decide to take the role. He said the scene made him understand how difficult it is for a leader to make a decision, and to be able to act out such agony would be a fascinating experience. Operation Chromite is set to hit Korean theaters on July 27.

He read The Most Dangerous Man in America: The Making of Douglas MacArthur written by Mark Perry, an American author specializing in military analysis, while watching various MacArthur speeches and documentary films.

“It’s very difficult to act out a real person. And while there are aspects of his character that as an actor I wanted to portray precisely, there are also fictitious elements.”

The Hollywood actor also referred to his role as Oskar Schindler (1993) in Schindler’s List, saying of the two characters that “although quite different, they’re similar in that both are exceedingly confident and overcame very difficult circumstances.”

Operation Chromite is set to hit Korean theaters on July 27. It will also feature some of Korea’s most celebrated acting veterans, including Lee Jung-jae and Lee Beom-soo.