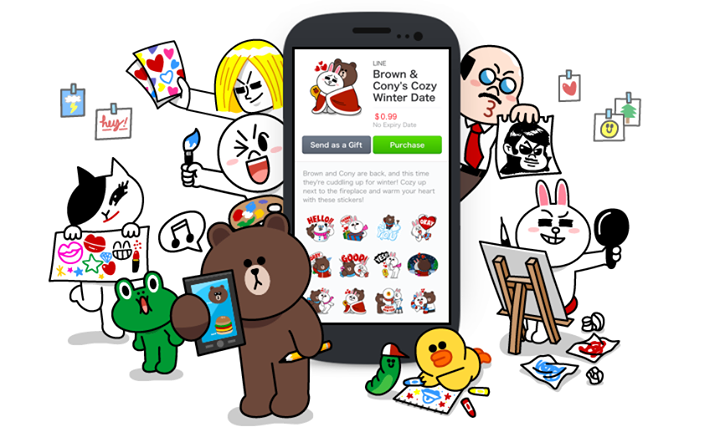 The platform enables Line messenger users to create and sell their self-made stickers used for their messaging. (image: Line)

According to Naver, operator of the messenger service, on June 17, the sales of Line Creators Market reached 1.7 billion won after just one month of its launch. The platform enables Line messenger users to create and sell their self-made stickers used for their messaging. The creators can sell their stickers at “Line Store” after an examination procedure by Line and the owners can receive 50 percent of the sales proceeds.

The Line sticker market opened on May 8 and since its opening, among 12,000 sticker sets in the market, a total of 1,200 sticker sets went on sales with 1.7 million of purchase. The average sales of top-10 selling stickers recorded 47 million won and the purchasers used the stickers 81 million times for their messaging.

The platform lets the sales of the stickers in four countries of Indonesia, Japan, Taiwan and Thailand where the Line Store is available. However, the submission of sticker sales can be made regardless of the nationality of the users.

Most of all, according to the industry, as the users create stickers carrying the characteristics of their own countries, it works as a localization strategy. Also, the market is regarded as a win-win platform for the content providers and Line to prosper together. The Line stickers are used to express various feelings and intentions during their messenger communications.

An official at Naver said, “Although anyone can submit the stickers into the market regardless of their nationalities, considering the fact that the stickers are being sold in only four countries, the amount of sales is significant. We will widen the number of countries available for the web store and expand our Line sticker business.”

Meanwhile, the number of Line subscribers surpassed the 450-million mark recently worldwide. In particular, the messenger service secured more than 50 million memberships only in Japan and some 30 million Japanese use the messenger app on a daily basis.