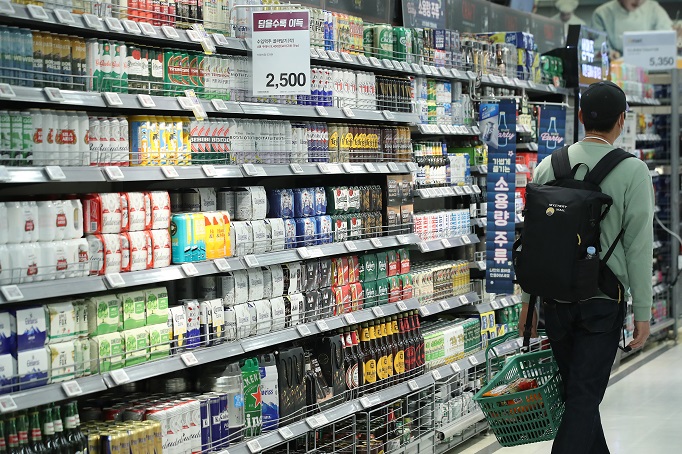 SEOUL, Nov. 22 (Korea Bizwire) — The pandemic has prompted many shoppers to make their purchases online, resulting in booming online sales across the retail landscape with the exception of a few regulated fields.

The value of online shopping transactions stood at 46.9 trillion won (US$40.8 billion) in the April to June period of this year, up 25.1 percent from a year earlier, according to data from Statistics Korea.

In the liquor industry, however, sales fell sharply since strict social distancing regulations and forced business closures resulted in a precipitous drop in the number of visits to bars or restaurants among Koreans.

With strict regulations for online alcohol sales (only traditional Korean liquor sales and delivery is permitted via e-commerce channels), the liquor industry had no choice but to bet big on a return to normal.

Many consumers had to seek other alternatives to satisfy their desire for alcohol consumption, leading them to substitute ‘hon-sul’ (drinking alone) or ‘home-sul’ (drinking at home) for stopping by brick-and-mortar stores.

With the implementation of the government’s new ‘living with COVID-19′ scheme, the industry seems to be busier than before as an increasing number of people have begun to dine out, but as virus cases spike again, vendors and businesses are beginning to worry about the prolonged pandemic effect. 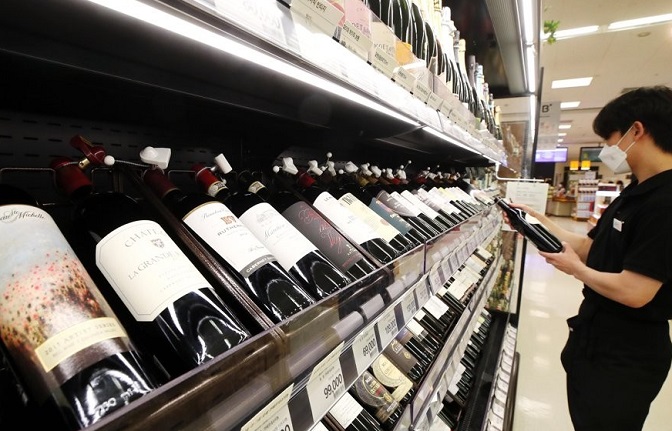 This photo shows the wine section of a retail outlet in Seoul on July 29, 2021. (Yonhap)

Against this backdrop, the importance of online liquor sales has risen to prominence among small businesses and liquor importers in particular, and calls for the government to ease legal constraints for online alcohol sales are rising again.

In late September, the European Chamber of Commerce (ECCK) in South Korea disclosed its 2021 regulatory environment white paper suggesting to the National Tax Service that “smart ordering” for online purchases of alcoholic beverages will be expanded.

Smart ordering systems allow customers to order alcoholic beverages with a mobile application, but only the person placing an order is allowed to pick up the ordered product following verification procedures at a store.

Wine importers in particular are pinning their hopes on being able to sell wine via online shopping channels to boost their sales. South Korea’s wine imports hit a new high in 2020, reaching $330 million, up 27.3 percent over the previous year, according to the Korea Customs Service.

As with this year, wine imports from January to August amounted to $37.5 million (430 billion won), up 96.5 percent from the same period last year. 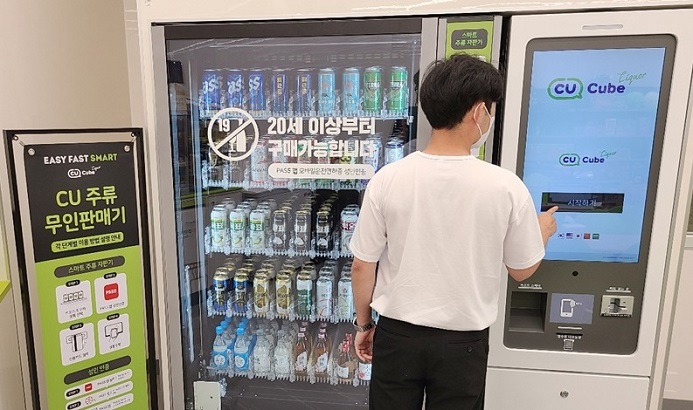 This photo provided by convenience store chain CU on July 12, 2021, shows a new liquor vending machine installed at a branch in the eastern city of Goseong, Gangwon Province.

But concerns about full deregulation of online alcoholic sales are still high.

In a report released last month, the National Assembly Research Service, a subgroup of the nation’s law-making institute responsible for legislation and policy research, pointed out, “Full-fledged online alcohol sales may bring about other issues such as rising cases of underage alcohol purchases, damage to the traditional liquor market, and protecting the competitiveness of the local liquor industry.”

“When it comes to alcohol access restrictions in public places, South Korea’s regulatory environment is rather weak compared to other OECD nations, which impose limits on hours or days that alcohol can be sold, limits on the number of local liquor stores, and bans on liquor advertising,” the research group also said.

“Korea has no alcohol access restrictions other than age and online sales.”

Proponents of the current legal environment argue that enforcing regulations on alcohol sales should be carried out in terms of enhancing public health rather than aspects of industrial regulations.

Jeong Ji-yeon, secretary-general of the Consumers Union of Korea (CUK) agreed, saying, “South Korea has easier access to alcohol compared to other nations including the U.S.

The decision to make alcohol beverages available via online channels should be considered carefully.”

Meanwhile, alcohol killed 5,155 Koreans in 2020, including cases of alcoholic liver disease, up 461 from the previous year. The alcohol related mortality rate rose 9.8 percent to 10 per 100,000 people last year.