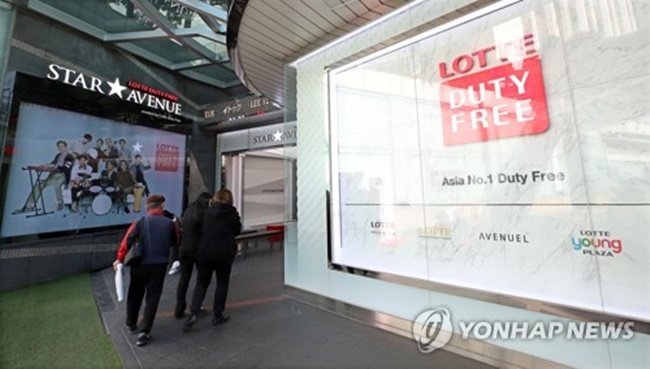 The weak bottom line was widely expected as the retailer has been suffering from China’s apparent retaliation over the deployment of the Terminal High Altitude Area Defense (THAAD) battery here. (Image: Yonhap)

SEOUL, April 2 (Korea Bizwire) – Hotel Lotte Co., a hotel and duty-free operator of South Korean retail giant Lotte, said the operating profit of its duty-free unit nosedived to a record-low level in 2017 amid a diplomatic row between Seoul and Beijing over a U.S. missile defense system.

The weak bottom line was widely expected as the retailer has been suffering from China’s apparent retaliation over the deployment of the Terminal High Altitude Area Defense (THAAD) battery here.

The company said its profitability is expected to improve as it moves to stabilize its business at home and abroad.

During a meeting with President Moon Jae-in in Seoul on Friday, Chinese State Councilor Yang Jiechi said there will be “tangible results in the near future,” when Moon requested China terminate what is seen as retaliation for the deployment of the missile shield system in South Korea.

Lotte also said it will focus on strengthening the competitiveness of its duty-free stores in Seoul after it recently began the process to end its money-losing concession deal at Incheon International Airport, the country’s main gateway.

Lotte had demanded a cut in rental fees considering the change in business climate, but it failed to reach an agreement with the airport operator.

On the global front, the retailer aims to expand its presence in the overseas market and diversify its customer portfolio, which had been heavily reliant on Chinese tourists.

Sales from its overseas outlets came to 140 billion won in 2017, up 45 percent from the previous year, according to the company.

It is currently reviewing whether to open additional malls in key Vietnamese cities, including Hanoi and Ho Chi Minh City.

Meanwhile, an appeals court delayed the first preliminary hearing for the head of Lotte Group, Shin Dong-bin, in a massive bribery scandal, according to sources. The hearing was originally set for Wednesday.

The business tycoon was sentenced to two and a half years in prison in February for giving 7 billion won in bribes to a foundation run by ex-President Park Geun-hye’s friend in return for business favors.