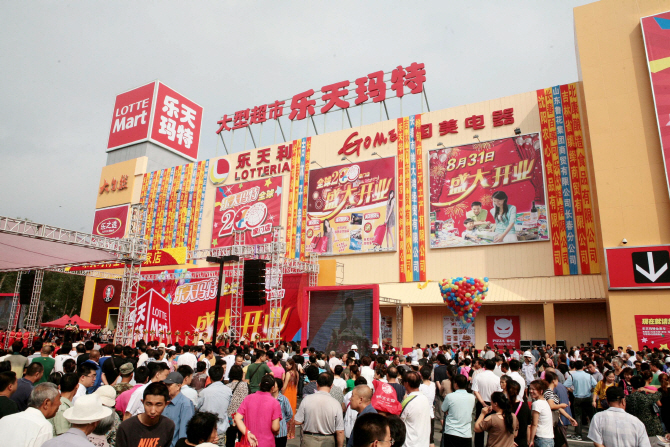 SEOUL, Nov. 1 (Korea Bizwire) — Lotte Group, a conglomerate whose affiliates sprawl from supermarkets to duty-free stores and construction, is hoping for a big comeback in its China business after suffering major losses resulting from a Seoul-Beijing diplomatic spat, corporate insiders said Wednesday.

Seoul and Beijing announced a day earlier that they will make efforts to put their relations back on track, toning down a yearlong conflict over South Korea’s decision to deploy a U.S. missile defense system on its soil.

Lotte became the direct target of Beijing’s retaliation against Seoul, having provided its golf course in March as the host site of the system, known as the Terminal High Altitude Area Defense, or THAAD.

A rough industry assessment is that the business group incurred about 2 trillion won (US$1.78 billion) in damages. Sales at its duty-free stores fell 30 percent after Chinese travelers stopped coming, taking a cue from their government, which restricted travel agencies from selling group package tours to South Korea. Lotte’s hotels lost up to 20 percent of Chinese guests, and its business hotels as much as 30 percent of customers from China.

Beijing also took punitive actions against the conglomerate’s business in China. Eighty-seven of its 112 Lotte Mart discount stores suspended operations, and sales at the handful of stores that managed to stay open dipped more than 80 percent. The conglomerate finally decided in September to give up and announced it would sell off its local chain.

Two major construction projects undertaken by Lotte were also stopped amidst the THAAD row. Lotte had invested 3 trillion won in building a Lotte Town in Shenyang and another 1 trillion won in a commercial complex in Chengdu. The Lotte Town was to house a theme park, a shopping mall and apartment homes, but its construction was suspended in November last year after “fire safety inspections.” The Chengdu project, which included an apartment complex and a department store, has yet to get an official permit from Chinese authorities.

“It’s not easy to exactly measure the level of damage. But if we add intangible losses to the foregone sales, the damage is probably close to 2 trillion won,” a corporate watcher said.

Officials at Lotte Mart said the process of selling the discount chain will continue. “There is no change to the business suspension orders on Chinese stores,” one official said. “Perhaps it will take time before any concrete action, but we are proceeding as planned.”

But people at Lotte Group affiliates showed some optimism.

“We are expecting visible changes soon, since there was an official announcement from the two countries,” an official at Lotte Shopping said. “There have been hard times from the loss of Chinese shoppers, but the expectation is that spring is finally coming.”