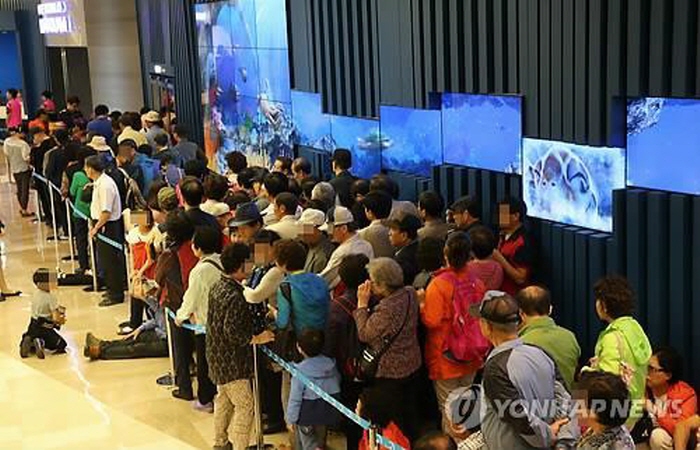 SEOUL, May 12 (Korea Bizwire) — South Korean retail giant Lotte Group reopened parts of its namesake skyscraper in Seoul in a subdued ceremony on Tuesday, nearly five months after they were shut down due to safety concerns.

The 123-story Lotte World Tower, set to be South Korea’s tallest structure upon its completion in 2016, was initially allowed to open in October. Two months later, some of the facilities were shut down pending an investigation into water seepage at its aquarium and vibrations at the movie theater.’

Last week, the Seoul city government lifted the usage ban on the suspended facilities upon consulting with industry and government officials. The municipal government also scrapped a construction ban on its concert hall on the condition that the retail conglomerate provides transparent and up-to-date information on safety management.

Welcoming the move, the company announced plans to offer free tickets to the aquarium and the movie theater to select visitors during a three-day pilot run ahead of the official opening.

“We plan to put our heart and soul into creating a cultural venue and a safety landmark that Seoul citizens can be proud of,” CEO Noh Byung-yong said in a May 8 statement.

Some 260,000 people visited the tower between May 9-11, according to Lotte Corp., which operates Lotte World Tower in southeastern Seoul. On a daily basis, this marks a 30 percent jump compared with an average 66,000 visitors in the month of April, it said.

The ban had been a major profit drag on the retail conglomerate, which plans to pump in 3.7 trillion won (US$3.4 billion) to complete the high-rise. The company claimed that the number of recent visitors has halved compared with last year.