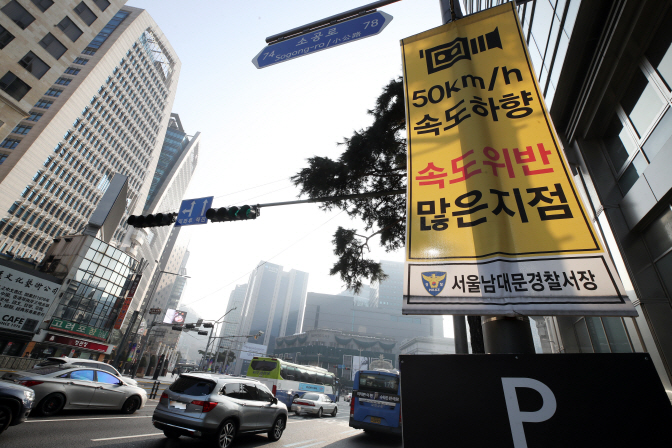 After the speed limits were imposed in 2018, car accidents dropped to 723 cases, down by 13 percent. (Yonhap)

The Seoul Metropolitan Government (SMG) and the Korea Transportation Safety Authority compared the time spent by two cars driving at 60 kilometers per hour and 50 km/h on three roads with bus-only lanes, which showed that there was only a 1.1 to 3.1 minute difference between the two cars in terms of the length of time it took them to complete the route.

“The time difference of 1.8 minutes is equivalent to waiting for a single round of traffic lights,” said city government officials. “Cars spend more time waiting for traffic lights and changing lanes than adhering to the speed limit.”

Roads in Seoul’s Jongno District that implemented a new speed limit of 50 km/h in 2018 saw the number of pedestrian accidents drop by 15.8 percent between 2017 and 2018. The number of casualties also dropped by 22.7 percent.

“In Seoul, pedestrian deaths account for 59 percent of all deaths by car accidents, so it is very important to ensure pedestrian safety,” said Kang Jin-dong, head of Transportation Operation Division at the SMG.

“We will continue to expand the new speed limit policy, while minimizing public inconvenience.”