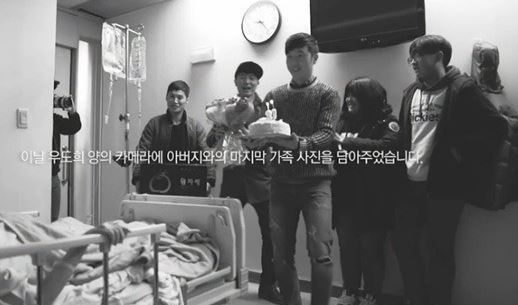 The said family’s child posted a wish on the app, asking for a family picture for his father, who is suffering from advanced pancreatic cancer.

SEOUL, Jan. 16 (Korea Bizwire) – A mysterious app called ‘Sour Sour Mansour’ is increasing in popularity after news of Korean stand-up comedian Song Jun-geun’s visit to a family’s home was spread online. Sour Sour Mansour, named after ‘suri suri masuri, the Korean version of ‘abracadabra,’ is an app through which users can post their wishes. The operators of the app, represented by a little wizard called ‘Mansu’, pick one wish a day and make it come true.

The said family’s child posted a wish on the app, asking for a family picture for his father, who is suffering from advanced pancreatic cancer. After being contacted by the app’s operators, Song Jun-geun visited the family with a digital camera, and helped to make the child’s wish come true. After this little event went viral online, ‘Sour Sour Mansour’ became a web phenomenon for its touching and sometimes funny ways of realizing people’s wishes. 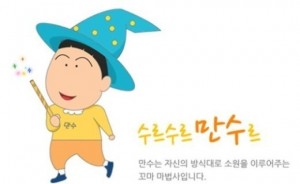 A female fan of IU once saw her wish come true after posting that she wanted to get a sign from the singer, since she was too shy to go to her concerts. The app operators, or Mansu the little wizard, realized her wish, giving her a CD with IU’s signature on it. A user who posted a picture of an iPhone with broken screen got a new iPhone 6 plus from Mansu.

The app also lets wishes come true in quirky and funny ways. One user posted a wish asking for tomatoes and melons, in hopes of preparing a diet to lose weight. However, the user was given dumbbells and a gym ball and a witty comment from Mansu that tomatoes and melons wouldn’t be the only food they would eat anyway, implying that the user would never stick to the diet, and would be better off working out instead.

Stand-up comedian Oh Na-mi also saw her wish come true. She wished that she would be transformed into a beautiful and elegant woman, and she got 100 lipsticks from Mansu. Her picture of the cosmetics on Facebook made users more curious about the app. The app is available through Apple’s App Store and Google Play.