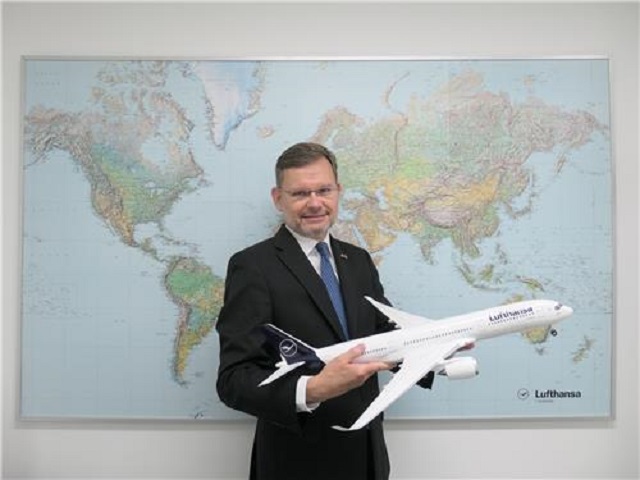 In this photo, taken on July 30, 2020, Alejandro Arias, general manager of Lufthansa’s South Korean operations, stands holding a model airplane of the A350-900 against a map of the world at the airline’s Seoul office. (Yonhap)

SEOUL, July 31 (Korea Bizwire) — Lufthansa Group Airlines, Europe’s biggest airline group, will increase the number of flights between Incheon and German cities, as the new coronavirus outbreak in Europe appears to have passed its peak, a Lufthansa executive said.

Lufthansa resumed three flights a week from Incheon to Munich on June 24, as European countries began to ease entry restrictions in June.

The COVID-19 pandemic brought the German carrier’s two routes to Incheon from Munich and Frankfurt to a halt in mid-March due to virus fears.

“We are more than happy to be able to serve our Korean customers again and are satisfied to date with demand. As soon as circumstances allow it, we will increase the number of weekly flights between Korea and Germany,” Alejandro Arias, general manager of Lufthansa’s South Korean operations, said in a recent interview with Yonhap News Agency.

Given his comments, the Incheon-Frankfurt route is expected to normalize in the near future once the travel restrictions in the single economic bloc are eased.

Rapid tests for COVID-19 are available at the Munich and Frankfurt airports, and test results come out after three to four hours, according to Lufthansa.

“The unprecedented coronavirus crisis has affected the long-haul business of every airline worldwide since the end of March. But we are currently seeing signs of recovery,” the 56-year-old German native said.

By October, over 380 Lufthansa Group aircraft will be in service, which means half of the group’s fleet would be in the air again, 200 more aircraft than in June, according to Arias.

Lufthansa was one of the first European airlines to resume flights to and from Korea in June.

The resumption came three months after it suspended all flights on the routes from Incheon to Munich and Frankfurt in mid-March due to declining travel demand following the virus outbreak.

Turkish Airlines and Polish Airlines also resumed flights in June, with Air France and Finland’s state-owned airline Finnair back to services in July. KLM Royal Dutch Airlines has continued to offer flights between South Korea and the Netherlands despite the pandemic.

“As the world’s 12th largest economy, Korea is an important market for the Lufthansa Group. Lufthansa’s vision is to be a leader in innovation and digitalization, and I regard Korea as the perfect market to drive this development,” Arias said. 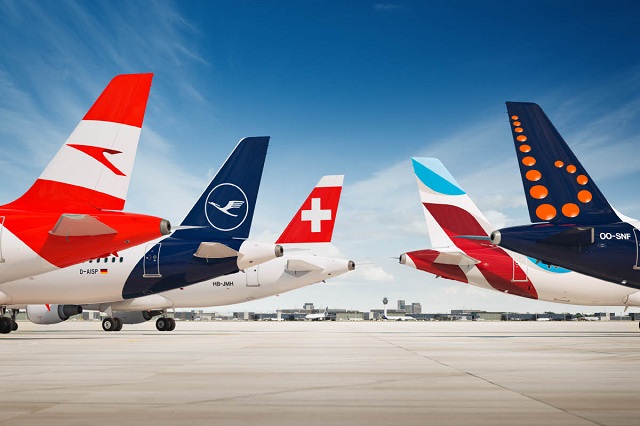 To woo Korean customers “who have growing desire to discover the world,” Lufthansa hired Korean cabin crew on every flight between the two countries and offers Korean-style catering on board, as well as in-flight entertainment and all other services in the Korean language.

The general manager did not reveal how many passengers use the Incheon-Munich route a week.

There are no Korean airlines that offer flights on the Incheon-Munich route for now.

As part of efforts to attract Korean passengers, Lufthansa has partnered with Korean firms, such as online shopping mall Interpark Corp., to introduce the new distribution capability (NDC) system, a brand-new digital channel that enables travelers to customize their travel experience through content differentiation from bookings to in-flight meals.

“The successful introduction of NDC is one example how we believe that Korea is the right place for such investments,” Arias said.

As for new business ties with Korean firms, the general manager said Lufthansa will continue to explore opportunities to cooperate with Korean partners to drive innovation and digitalization in the travel industry.

Faced with the pandemic, Arias said the company had taken several key measures and has a clear plan on how to sustain recovery from this unprecedented crisis that hit airlines out of nowhere.

“We have secured a stabilization package worth 9 billion euros (US$10.7 billion) from the German government and will carry out a comprehensive restructuring program to ensure the future viability of our company,” he said.

Lufthansa expects to have 100 aircraft less in the group’s overall fleet in 2023, when the coronavirus crisis is expected to be over.