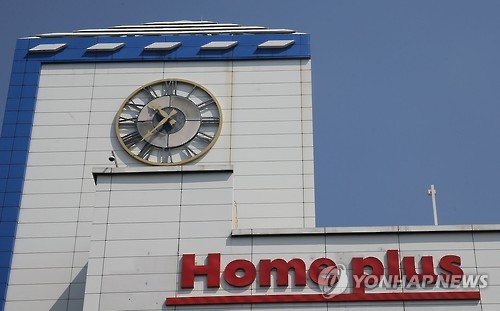 Homeplus is South Korea’s No. 2 supermarket chain next to E-Mart, run by retail giant Shinsegae, operating about 140 hypermarkets and some 700 smaller neighborhood shops nationwide. (image: Yonhap)

Homeplus is South Korea’s No. 2 supermarket chain next to E-Mart, run by retail giant Shinsegae, operating about 140 hypermarkets and some 700 smaller neighborhood shops nationwide. It logged 8.6 trillion won in sales and 788 billion won in earnings before interest, taxes, depreciation and amortization last year.

“Homeplus is South Korea’s leading retailer, which is profitable and has a bright business outlook,” Kim Kwang-il, the chief of MBK Partners, said. “We will invest 1 trillion won in Homeplus in the next two years to strengthen its market leader position and competitiveness.”

MBK, which manages about $8.2 billion in assets, said it will not carry out massive layoffs and will respect Homeplus employees’ current hiring conditions, vowing to closely cooperate with the company executives for continued operation in the local market.

Tesco had been rumored to have planned to pay 1.3 trillion won in dividends as a way to cut the asking price and tax bills, but MBK said such a plan was not included in the agreement.

With the sale of Homeplus, the largest subsidiary among its overseas operations, the debt-stricken British retailer closed its business here 16 years after entering South Korea in a joint partnership with Samsung Group, the nation’s top conglomerate, which sold back its stakes to Tesco in 2011.

Tesco joined global retail giants, including Walmart of the U.S. and France’s Carrefour, to retreat from the Korean market in the face of tougher competition with local chains backed by the nation’s powerful conglomerates, pulling back from formerly ambitious global expansion efforts.