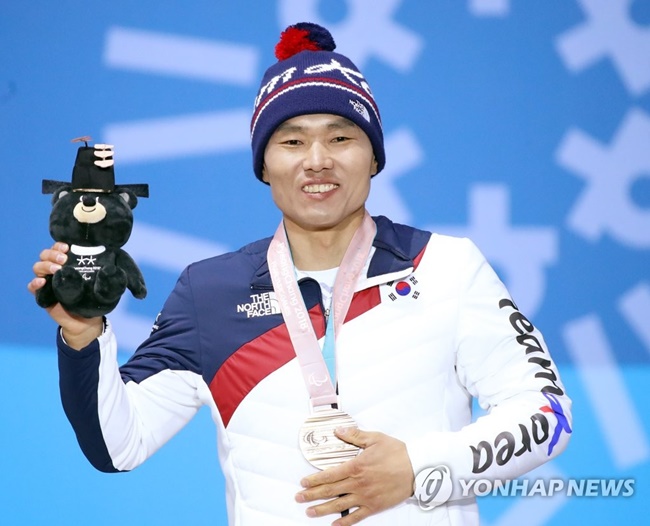 SEOUL, Mar. 13 (Korea Bizwire) — Nordic para skier Shin Eui-hyun, who brought South Korea its first medal of the Winter Paralympics in PyeongChang, has called on the major TV networks to give the sporting event wider coverage.

Speaking to the press on Sunday, Shin, who won the bronze medal in Men’s 15km Classic Cross-Country Skiing, said, “I received many calls since my story came to light. But still, I would like the public to show more interest in the Paralympics, as well as increased media coverage.”

Shin, who became the third South Korean athlete to win a medal in the history of the Paralympics, says despite growing public interest, the lack of broadcasting hours dedicated to the event is regretful.

Despite South Korean disabled athletes having their share of emotional and memorable moments in PyeongChang, South Korean TV networks with broadcast rights are being criticized for not having dedicated enough hours, reducing the Paralympics to a ‘league of their own’.

The treatment of the Paralympics, which has been pushed to the side, with only highlights being broadcast in the early hours, draws a stark contrast with that of the Olympics.

During the previous two weeks, major broadcasters in South Korea were seen airing the same events at the same time in a much contested ratings battle, with many viewers accusing them of ‘wasting radio waves’.

Against this background, petitions have been filed to the official website of the presidential office, calling for extended broadcast hours of the Paralympics.

Shin, who finished the Men’s 15km Classic Cross-Country in third place in a time of 42 minutes and 28.9 seconds, is set to aim for another medal on Tuesday in biathlon.

“I feel a sense of responsibility to do well. In the next event, I will make sure to hear the national anthem played at the podium by winning the gold medal,” Shin said.