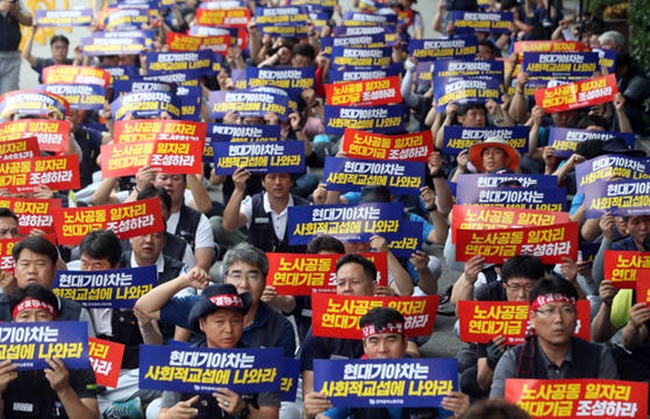 SEOUL, Aug. 26 (Korea Bizwire) — As the country awaits the verdict next week in the wages lawsuit filed by Kia Motors’ labor union, which could have immense consequences for the South Korean automobile industry as a whole in the coming years, the debate over the legitimacy of so-called hard-line aristocratic labor unions is back in the spotlight.

In addition to the ongoing lawsuit, the labor union of South Korea’s second-largest car maker launched a partial strike earlier this week, following in the footsteps of its sister company Hyundai Motor, demanding better working conditions.

However, the lack of response and sympathy among the public is palpable, as the automobile labor union’s persistent uncompromising stance is widely perceived as ‘too demanding’ and ‘out of touch’ with the country mired in an economic slump, giving the unions the title of ‘aristocrats’.

The public’s unfavorable view reflects worries over political tensions with China, the world’s largest automobile market, surrounding the South Korean deployment of a controversial THAAD anti-missile system, which saw sales of Kia Motors drop a whopping 54 percent between January and July this year, according to the company’s data.

Adding to the animosity are unilateral demands as exposed in reports by South Korean media Newspim that being late or leaving early should not affect the prospect of getting a bonus.

At a seminar held in Seoul earlier this week to discuss pressing issues facing local carmakers, executives from Hyundai Motor Co. and Kia Motors Corp. expressed concerns about the unfriendly business environment in the automobile market, citing high costs and low productivity as major sources of concern as they compete in a more competitive global marketplace. 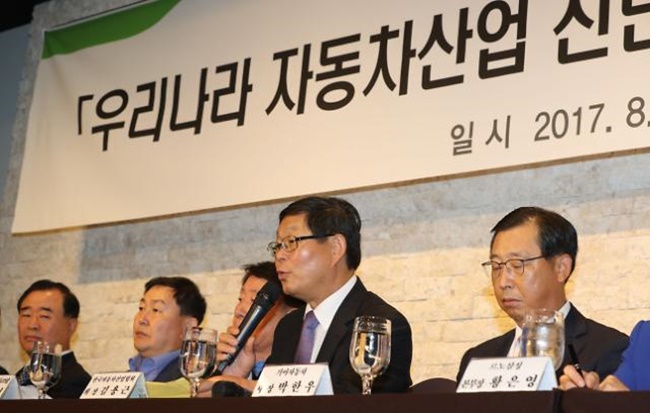 As the country awaits the verdict next week in the wages lawsuit filed by Kia Motors’ labor union, which could have immense consequences for the South Korean automobile industry as a whole in the coming years, the debate over the legitimacy of so-called hard-line aristocratic labor unions in South Korea is back in the spotlight. (Image: Yonhap)

Data released by the Korea Automobile Manufacturers Association during the seminar showed the average annual income among workers at five major South Korean car manufacturers in 2016 including Hyundai, Kia, GM Korea, Renault Samsung and SsangYong was estimated to be around 92 million won, higher than that of international competitors like Toyota and Volkswagen, at 91 million and 80 million won, respectively.

The gap widened when it came to the ratio of the average worker’s salary to the company’s sales, with the figure among South Korean carmakers standing at 12.2 percent compared to 7.8 percent for Toyota and 9.5 percent for Volkswagen.

Shockingly, productivity levels among South Korean automobile workers were the poorest despite the higher wages, with Hyundai Motor workers taking an average of 26.8 hours to manufacture one vehicle as of 2015, trailing behind their counterparts at Toyota and Ford who took 24.1 and 21.3 hours, respectively.

Against this backdrop, production at home and exports have decreased for two consecutive years, with India taking over the sixth spot in the global auto production rankings. The title of the fourth-biggest car exporter in the world for over a decade was also snatched by Mexico.

“The automobile industry now faces a harsh business environment after 30 years of consistent clashes between companies and unions and the burden of growing wages. We are at a crossroads where we have to make a choice between rebounding or being left behind,” Kim Yong-geun, the chairman of the Korea Automobile Manufacturers Association said, while emphasizing the magnitude of the current situation.

With the Seoul Central District Court set to deliberate on the lawsuit between Kia and its labor union next week, South Korean automobile companies are closely watching the developments as a decision in favor of the union could force them to take drastic measures, including possible job cuts.