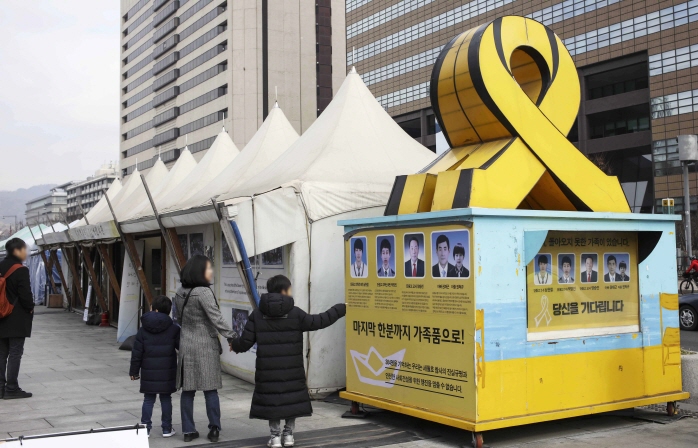 Tents set up in downtown Seoul by families of the victims of the sunken ferry Sewol in memory of the victims and in protest to demand a full investigation of the tragedy. The families agreed to withdraw the tents that were set up a month after the incident.(Yonhap)

SEOUL, Mar. 17 (Korea Bizwire) — The memorial portraits of the hundreds of victims who died on the ill-fated ferry Sewol in 2014 were relocated from a protest site in central Seoul on Sunday, years after they were placed there amid calls for punishment for those responsible for the ferry’s sinking.

The association of the victims’ families held a ceremony Sunday morning to remove the 304 portraits from a tent at Gwanghwamun Plaza in central Seoul.

The portraits were moved to a temporary place in the underground library inside Seoul City Hall. A special memorial exhibition for the ferry victims will be set up on the vacated area of the plaza.

The bereaved families and their supporters have been occupying a strip of the popular plaza since July 2014, calling on the government to get to the bottom of the deadly sinking, whose real cause, the families believe, remains unknown.

Some 100 members of the bereaved families and others gathered together for the ceremony to commemorate the 304 victims, mostly high school students.

The ferry sank en route from Incheon to the southern resort island of Jeju on April 16, 2014, carrying students and a faculty from Danwon High School on a school field trip.

The ceremony was held one day before the victims’ families are set to remove the tents and other memorial installations they have maintained at the plaza.

“It is heart-breaking for the families to remove the memorial site before they succeed in bringing those who are responsible to justice and finding the truth (behind the sinking),” Jang Hoon, a representative of the victims’ families, said during the ceremony.

“But we accept the relocation because we are well aware that Gwanghwamun Plaza belongs to the citizens.”

The families and their supporters also pledged to continue their truth-finding efforts going forward.