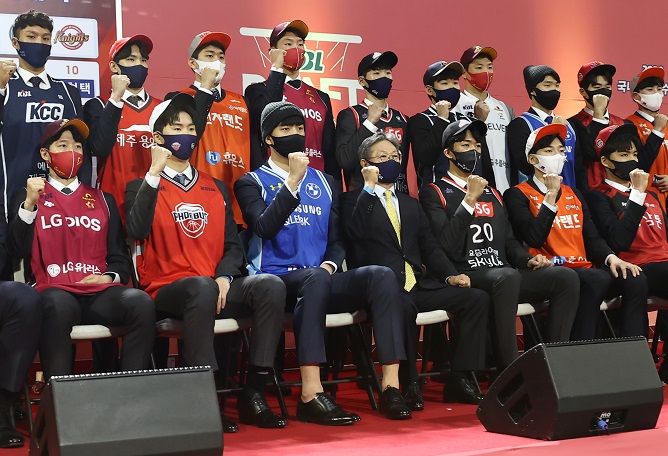 This photo shows players drafted by KBL teams posing for a group photo at Jamsil Students’ Gymnasium in Seoul on Nov. 23, 2020. (Yonhap)

SEOUL, Nov. 25 (Korea Bizwire) — Unlike other professional sports, the Korean Basketball League (KBL) held its draft ceremony earlier this week with both players and team managers in attendance.

The in-person style of draft was not new, but in times of COVID-19, there were some eye-catching moments.

Unlike in the past when each team gave just their new players a team jersey and hat, this year’s draft featured one more special item – a face mask with the team’s logo.

After standing on the main stage of the draft, the players donned their new jersey and hat and then put their personal mask in their pocket and wore the team logo-printed mask.

The entry to the floor of the stadium was limited to players and team officials. In the past, the rookie draft was crowded with the families and friends of the players who gave flowers to congratulate them on their selection.

This year there were no such scenes.