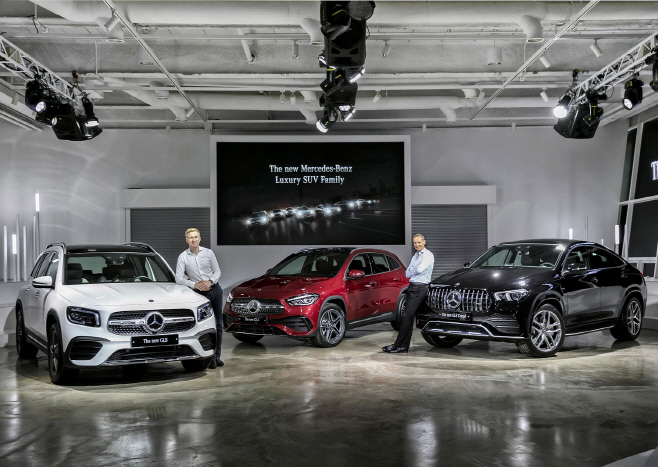 In this photo taken Aug. 27, 2020, and provided by Mercedes-Benz Korea, Mark Raine (R), vice president in charge of product and marketing operations, and Johannes Schoen, director in charge of planning, price and product strategy, stand beside the GLB, GLA and GLE Coupe models (from L to R) at Seoul Wave Art Center in Jamwon, southern Seoul, ahead of an online launching event for the models.

SEOUL, Aug. 27 (Korea Bizwire) — Mercedes-Benz said Thursday it will launch three new SUVs in South Korea as it seeks to cement its leading status in the country’s imported car market.

With the addition of the three models, Mercedes-Benz Korea will have nine SUVs in its lineup. The three SUVs went on sale in Europe last year, it said.

The company said it plans to start sales of the GLA and GLB models in September and the GLE Coupe model in October with prices between 54 million won and 119 million won (US$46,000-$100,000).

Mercedes-Benz has led other imported vehicle brands in recent years, helped by a growing appetite for premium vehicles among Korean consumers and preference for German brands.

In the January-July period, Mercedes-Benz sold 41,583 vehicles in Korea, up 2.8 percent from 40,461 units a year earlier. It accounted for 35 percent of the Korean imported passenger vehicle market in the first seven months.