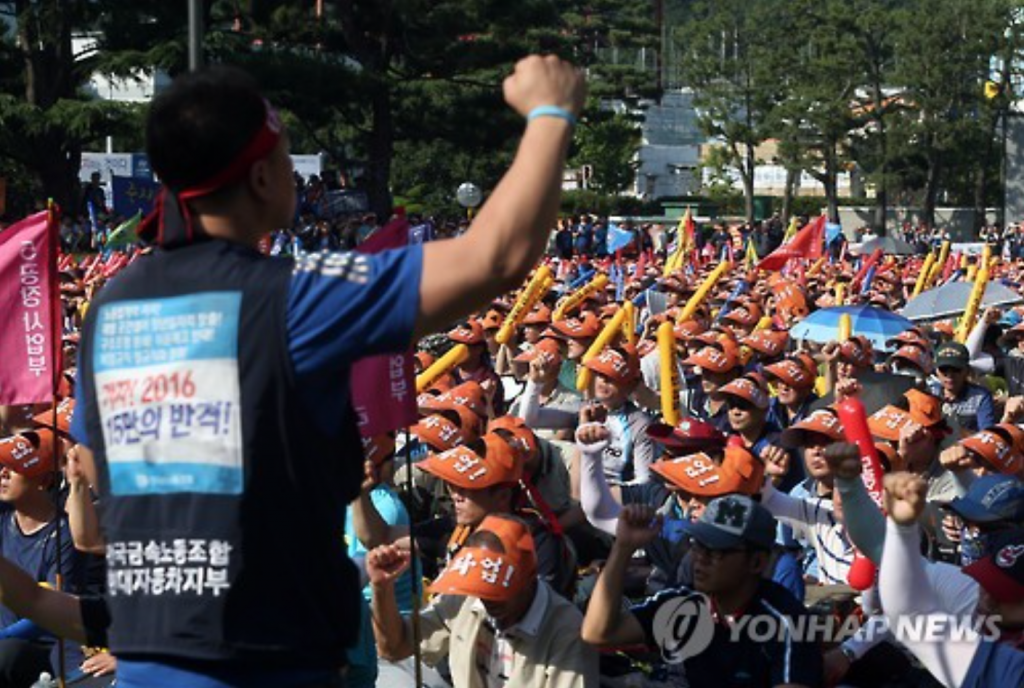 A total of 24 strikes have been held within the 27 negotiation sessions, the most in 12 years. The dispute has resulted in an accumulated loss of production of an estimated 142,000 cars worth 3.1 trillion KRW, the highest in the union’s 25 years of strike history. (image: Yonhap)

SEOUL, Oct. 17 (Korea Bizwire) – The public image of Hyundai Motor has really taken a blow this time. Despite already pulling in some of the highest salaries in the country at an average of 90 million KRW per year, the labor union has asked for more. Even the President of Korea criticized the union for being selfish.

Wage negotiations began May 17 and five months of deadlock culminated on Sep. 14. This year’s strike has been especially long, considering that other labor stoppages usually ended as early as July and before Chuseok (Korean Thanksgiving) at the latest. The strike has continued because a whopping 78.05 percent of workers opposed the proposed wage increases.

A total of 24 strikes have been held within the 27 negotiation sessions, the most in 12 years. The dispute has resulted in an accumulated loss of production of an estimated 142,000 cars worth 3.1 trillion KRW, the highest in the union’s 25 years of strike history.

Auto parts suppliers have borne the brunt of the blow, and some are on the verge of shutdown. The factories at Hyundai Motor are run under a just-in-time production method, which means that when the production line of Hyundai Motors stops, subcontractors also have to stop supplying the parts.

Among those affected, 348 first stage auto part suppliers for Hyundai Motors recorded 90 billion KRW in daily sales volume last year, but because of the strike, the flow of supply has been disrupted this year. The loss of sales volume from the union’s action is estimated to be 1.4 trillion KRW. Second and third stage auto parts suppliers have also suffered.

Labor strikes may bring better benefits and higher wages for workers at Hyundai Motor, but at the expense of the livelihoods of subcontractors.

Consumers are disgusted with the situation. Negative sentiments about Hyundai are spreading, and some are even refusing to buy the company’s vehicles. Some speculate that losses from the strike will result in a retail price hike of Hyundai cars.

The current labor union head has a mandate that continues until next year, which means it is most likely that labor strife will return next year with even more demanding requests. The only years free if a work stoppage were 1994 and 2009 to 2011, when the labor union was run by a head who was more reasonable.