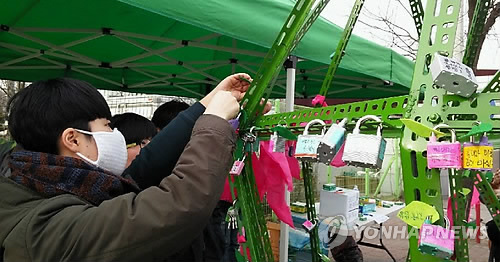 Citizens placed the locks on the fence in a gesture of hope for the resolution of labor disputes currently plaguing the fourth largest automaker in Korea. (image: Yonhap)

SEOUL, March 18 (Korea Bizwire) – Ssangyong Motor’s trade union strongly condemned the company’s actions as it cut some of the “Locks of Hope” placed by activist citizens on the wired fence surrounding its Pyeongtaek plant. Citizens placed the locks on the fence in a gesture of hope for the resolution of labor disputes currently plaguing the fourth largest automaker in Korea.

The trade union announced on March 17 that the company had cut some of the locks, and that they were looking into the circumstances under which the removal occurred.

The trade union spotted some company officials cutting locks at around 11:20pm on March 16, and prevented them from damaging more. Among some 300 locks, the union said that around 30 were cut from the fence.

A representative from the union said, “The damaged locks were placed at the wired fence by people who joined the cultural festival for action of hope held on March 14, praying for the peaceful resolution of the labor dispute with the company. In addition, the locks were placed in remembrance of the 26 workers who committed suicide after the company’s mass lay-offs.”

In April 2009, Ssangyong cut 2,646 jobs after it was put under court receivership in the aftermath of the 2008 global financial crisis. The layoffs sparked a 77-day-long strike by 5,500 unionists at the company’s factory in Pyeongtaek, some 70 kilometers south of Seoul. Some 1,900 employees chose to retire, while 164 were dismissed and 455 forced to take unpaid leave.

Among those who were forced to take unpaid leave, 454 were rehired in March 2013, but others have not yet returned to their jobs.

Kim Deuk-joong, the union head for the dismissed workers, said, “Now, the company and the union are in talks with each other for the restoration of the laid-off workers. Under these circumstances, cutting the locks was not a proper course of action. We asked the company not to damage the locks anymore.”

An official at Ssangyong Motor said, “We cut the locks out to protect our facilities. For now, the removal has stopped. We will discuss the issue with the trade union.”