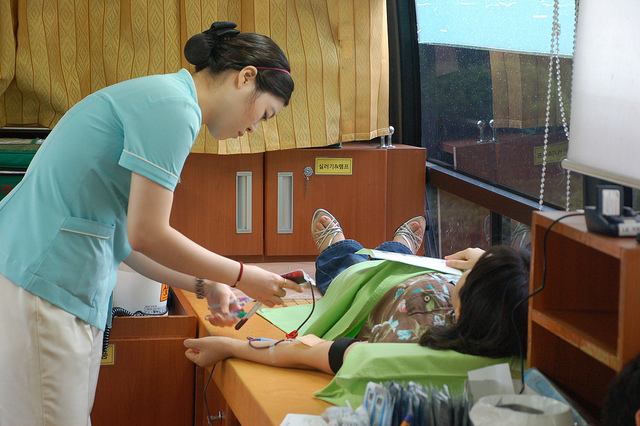 Some 230 organizations and more than 25,000 people have called off blood donations scheduled for between June 3 and July 15, apparently scared by MERS. (image: LGPER/flickr)

SEOUL, June 14 (Korea Bizwire) – Tens of thousands of South Koreans have canceled blood donations amid fears over a possible infection by the MERS virus that has claimed 15 lives in the country since late May, the Korean Red Cross said Sunday.

Some 230 organizations and more than 25,000 people have called off blood donations scheduled for between June 3 and July 15, apparently scared by MERS, the blood service division of the Korean Red Cross said.

On Friday, there were 8,587 blood donors across South Korea, down 12.9 percent from the same day last year, when 9,862 people donated blood.

This has significantly cut the blood supply, with the humanitarian organization currently possessing just enough blood to save lives for the coming six days.

Five days worth of blood is considered “safe,” but by this standard, blood types O and A are lacking or barely meeting the minimum.

“The outlook on the blood supply is grim, as group donors continue to cancel donating blood,” a Korean Red Cross official said. “If our blood supply drops further, we will have to follow our emergency response manual.”

The Korean Red Cross also canceled its blood drive scheduled from Friday to Saturday in central Seoul over MERS. The blood drive was to mark World Blood Donor day on Sunday.

MERS is a viral respiratory illness that was first reported in Saudi Arabia in 2012. Since then, some 1,100 cases had been confirmed throughout the world until the outbreak here was confirmed on May 20.

The virus has so far killed 15 and sickened nearly 150 people across South Korea.