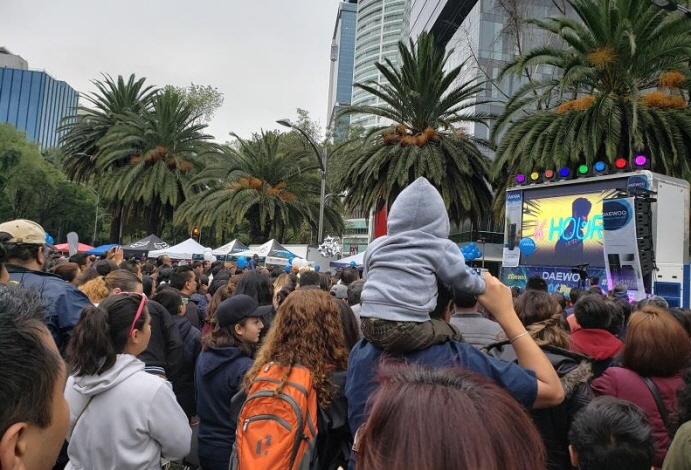 Mexican people gather during a publicity event on a street in Mexico City on Sept. 30, 2018, to mark the launch of an FM program featuring intensive coverage of “hallyu,” or Korean pop culture and entertainment, starting in October. (image: Yonhap)

The “K-Hour” program of Radio Centro will air for one hour from 6 p.m. every Sunday.

The radio station has been broadcasting a trial program on “hallyu,” or the phenomenal popularity of Korean culture abroad, since June 24 on its channel “Alfa.”

In a survey recently conducted by Nielsen, the program drew at least 1.4 million listeners and recorded a 7.33 percent rating, putting it on the list of top ten radio programs.

Radio Centro said the show appealed to listeners with its diverse content from Korean pop songs to classical music and traditional culture.

“The program reflects hallyu taking root in Mexican society,” said Lim Sung-min, head of El Coreano, a newspaper for Korean residents in Mexico. “I take pride in the launch of a program exclusively dealing with overall Korean culture.”