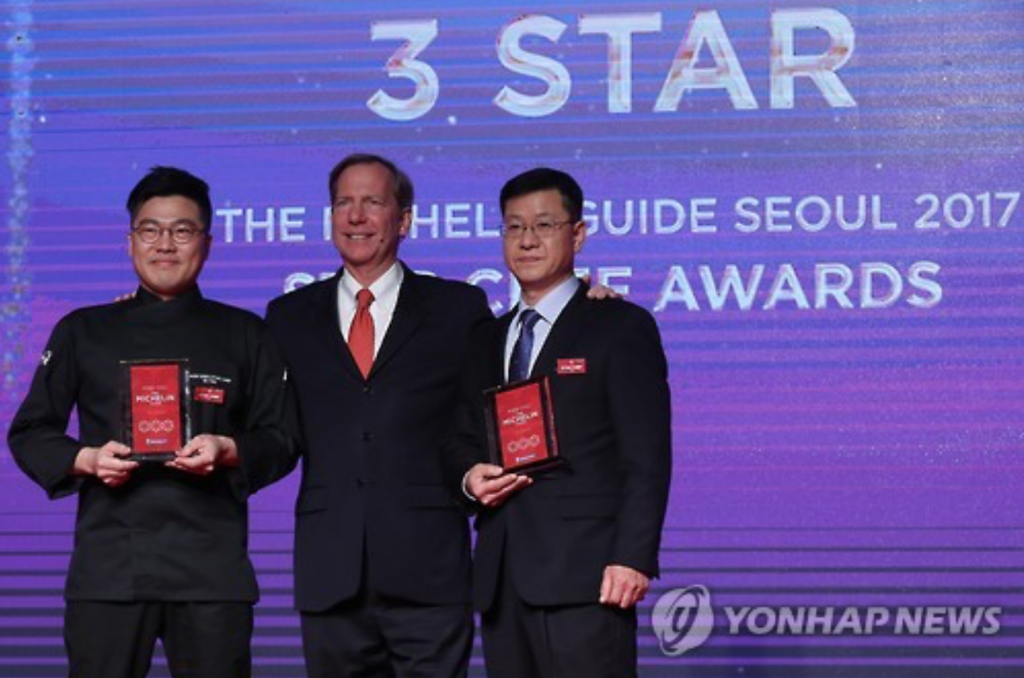 Kim Jung-jin (L), a chef at Gaon, and Kim Sung-il (R), a chef at La Yeon, pose for a photo with Michael Ellis, international director of the Michelin guides, after receiving three stars from Michelin during the awards ceremony at Hotel Shilla. (image: Yonhap)

The 2017 Seoul Michelin guide lists 140 restaurants and 30 hotels in Seoul, which is the 28th edition and fourth in Asia following Japan, China and Singapore.

The guide published by the French tiremaker bestows three stars to dining places offering exceptional cuisine worth a special journey and gives two stars to restaurants worth a detour for excellent cuisine. The Michelin guide selects the best restaurants and hotels in 28 countries to highlight local culinary scenes, as well as new trends and emerging young chefs.

“The richness of selectiveness shows that Seoul has emerged as one of the most exciting and dynamic culinary scenes in the world,” Michael Ellis, international director of the Michelin guides, said during the awards ceremony.

“In light of getting the Michelin stars, my team and I will do our best to introduce the best Korean dishes to the world and make them into valuable tourism resources,” said Kim Sung-il, the chief chef of La Yeon.

Last week, Michelin unveiled the list of 36 restaurants that have received a Bib Gourmand, an award given to restaurants offering a quality menu for a maximum of 35,000 won (US$30). The menus included a wide range of 16 styles of local dishes, including Korean noodles, beef dishes, soup and dumplings.

Michelin published the 2017 Seoul guide in Korean and English, as well as a digital version, which is priced at 20,000 won.