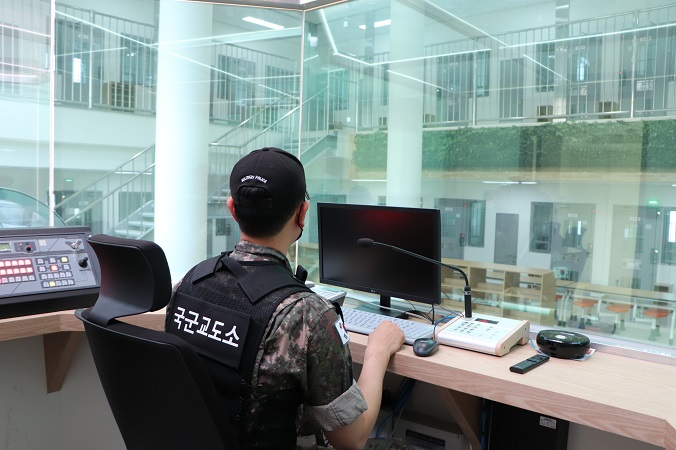 A correctional officer monitors the dayroom of the Military Correctional Institution in Icheon, 80 kilometers south of Seoul, in this photo released by the institution on June 23, 2022.

ICHEON, June 23 (Korea Bizwire) — South Korea’s military on Thursday launched new correctional facilities with an advanced monitoring solution, including the country’s first suicide prevention sensors and other systems designed to improve the living conditions of inmates and help reduce the workload of guards.

The opening of the institution, located 80 kilometers southeast of Seoul, came around two years after the Military Correctional Institution broke ground on a 17.7-billion-won (US$13.6 million) project to replace the previous one established in a nearby area more than three decades ago.

“It is a product of longtime efforts to improve the working conditions of correctional personnel and promote healthy re-socialization of inmates on the basis of a robust security system and comfortable environment,” Lt. Col. Lee Yong-hun, who heads the institution in Icheon, Gyeonggi Province, said.

The new cells have sensors on their ceiling that can track inmates’ breathing in real-time to help prevent suicides. They are programmed to turn on warning lights and send an alarm if inmates breathe abnormally or stop breathing for a certain period.

It is unprecedented for a correctional institution in South Korea, either civilian or military, to be equipped with such a state-of-the-art system. 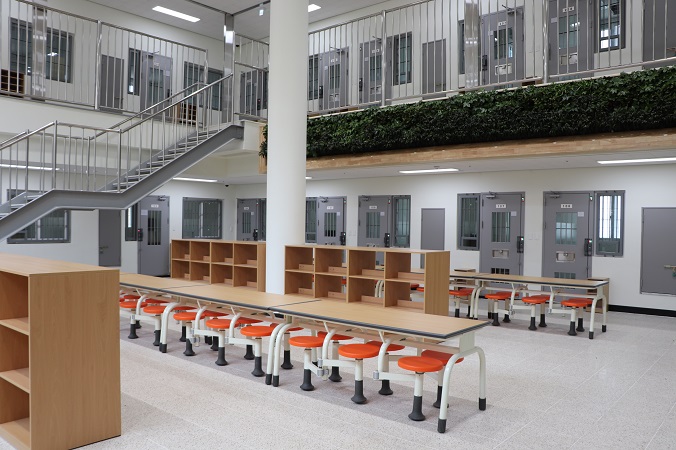 This photo, released by the Military Correctional Institution on June 23, 2022, shows the dayroom of its newly-built facility.

The new prison also has barbed wire fences with artificial-intelligence-powered sensors to distinguish people’s movements from other objects through their deep-learning algorithm.

Such an efficient monitoring system is crucial, especially given the military is set to face manpower shortages amid South Korea’s chronically low birth rates, according to officials.

In order to avoid blind spots, as in conventional prisons where cells are lined up in a corridor, the new facility has an open and spacious “dayroom,” where guards can monitor all inmates at a glance.

The institution features individual shower booths and more single rooms to give more privacy to inmates.

It plans to offer various vocational training programs for prisoners, helping them obtain skills in 3-D printing, heavy machinery and other fields.

There are around 80 inmates in the prison, including four sentenced to the death penalty. South Korea last carried out an execution on Dec. 30, 1997.