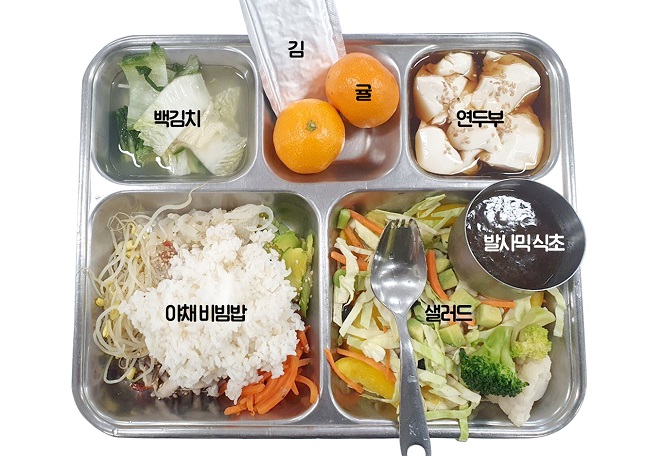 This photo, provided by the defense ministry on Dec. 27, 2020, shows a vegetarian meal consisting of cereal, salad, bread and soy milk.

SEOUL, Dec. 27 (Korea Bizwire) — The military will provide vegetarian and Muslim enlistees with a vegan diet excluding any meat and ham starting next year, the defense ministry said Sunday.

From February, prospective draftees will be asked to mark if they are a vegetarian when they take physical examinations, the ministry said.

Two columns marked as “vegetarian” in both Korean and English will be available on the form.

Such personal information will be sent to the unit that the enlistees will serve in, allowing for a systematic ration program for vegetarian and Muslim soldiers.

“As soon as we identify the number of vegetarian and Muslim soldiers next year, we will develop customized menus,” a military source said.

Currently, two soldiers in service have officially identified themselves as a vegetarian and a Muslim, respectively. The military currently provides them a diet without any meat.

The ministry’s decision appears to reflect the trend of a growing number of vegetarians and enlistees from multicultural families.