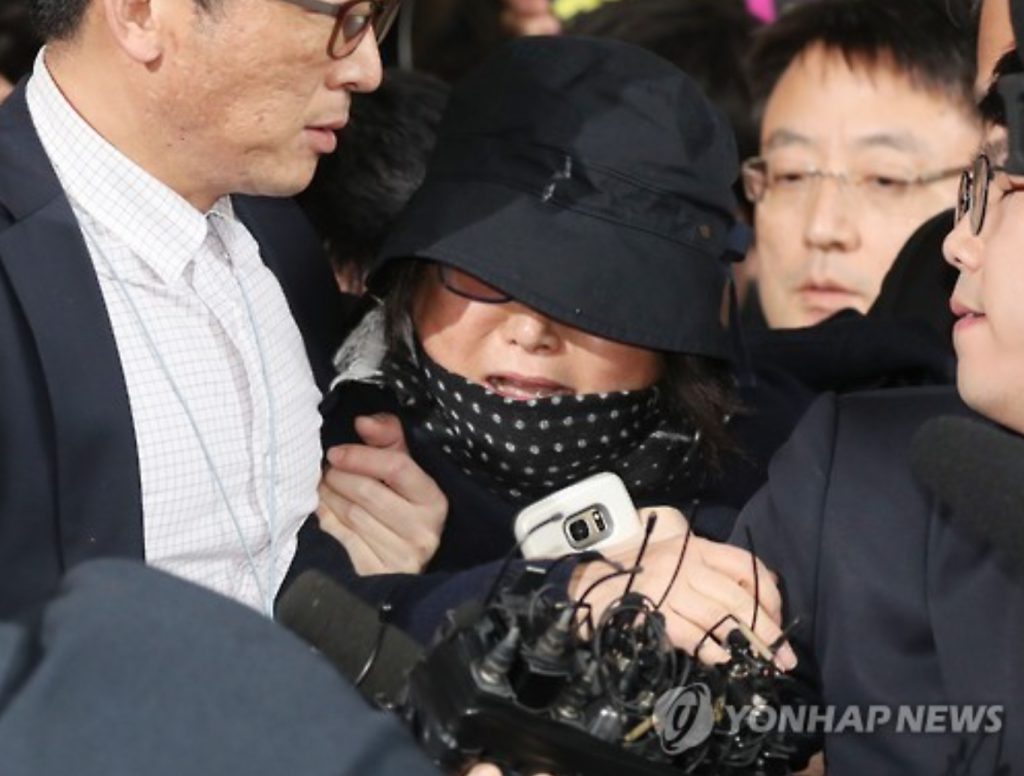 Choi Soon-sil surrounded by reporters as she enters the Seoul Central District Prosecution Office in Seoul for questioning on Oct. 31. (image: Yonhap)

SEOUL, Oct. 31 (Korea Bizwire) – South Korea’s financial authorities are looking into whether a local bank has extended preferential loans to the daughter of President Park Geun-hye’s friend at the heart of a massive influence-peddling scandal, officials said Monday.

Chung Yoo-ra, a college student, is alleged to have taken out foreign exchange loans with preferential treatment from KEB Hana Bank, the largest lender here. She is a daughter of Choi Soon-sil known as a longtime confidante to Park and one of the most influential figures under the current administration.

Choi, a 60-year-old civilian, is accused of having edited some of the president’s draft speeches, meddled in state affairs and exploited her ties with Park to collect tens of millions of dollars from conglomerates in the guise of funds for public projects in the culture and sports fields.

Choi’s daughter received a loan of around 250,000 euros (US$270,000) by using land in PyeongChang in the eastern province of Gangwon as collateral in late 2015, several months before moving to Europe with her mother. The 230,000-square-meter plot is under their joint ownership.

Chung, who was 19 years old at that time, used a letter of credit from the bank’s Apgujeong branch in southern Seoul to get the money in Germany.

It’s quite unusual for an individual to use such a borrowing process common among trading companies, according to Rep. Jung Jae-ho of the main opposition Democratic Party.

It’s apparently aimed at covering the tracks of their financial transactions, he argued.

“We are working to figure out the relevant facts,” an official at the Financial Supervisory Service (FSS) said, citing a comprehensive audit of KEB Hana Bank.

The watchdog has prolonged the regular audit through Friday rather than launch a separate special probe.

The FSS is also closely monitoring the possibility of additional suspicions regarding Choi’s financial transactions amid concerns that the high-profile scandal may spread to the financial sector.

The bank, however, has flatly denied any illegal loans or other special favors to Choi and her daughter, saying it issued the letter of payment guarantee on the basis of her credit level and the authenticity of the collateral.

Bank officials also said Chung reported the foreign exchange transaction to the Bank of Korea under a related law.

Chung is known to be staying in Europe, while her mother Choi flew back to South Korea on Sunday on a flight from London.

On Monday, Choi appeared at the prosecutors’ office to be questioned over a host of allegations that led to the president’s public apology and the dismissal of several of her closest aides at her office Cheong Wa Dae.

“Financial reform should go on,” Yim Jong-yong, chairman of the Financial Services Commission (FSC), said in a message to other FSC officials. “We should be desperate for completing (it) under any circumstances for the future of South Korea’s finance.”

He stressed the need for an “unswerving and consistent” financial policy, saying it will be able to give some comfort to the people concerned about the political crisis.

“Pre-emptive risk management is necessary over potential factors, both external and internal, that may cause instability in the financial market,” he said.

He instructed FSS officials to do their best for financial stability by carrying out their duties “calmly and thoroughly,” while “resolutely” implementing existing policies.