“First, the government will quickly begin its process to select a firm that will recover the ship. The government will come up with thorough plans to prevent the loss of any missing persons while the ship is being hoisted.” 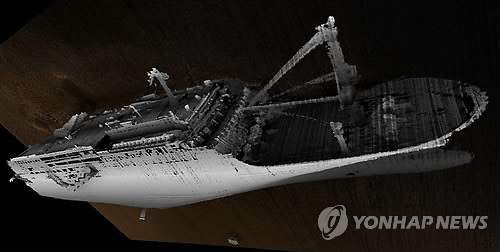 The technical review has tabled five available options of techniques in hoisting the sunken ship, though only one of them, using offshore cranes to pull up the ship and place it onto a submersible floating dock, currently stands out. (image: Yonhap)

SEJONG, April 22 (Korea Bizwire) — The government will immediately begin the process of recovering the passenger ship that sank last year, killing over 300 people, but the salvage work may take some time, the maritime minister said Wednesday.

The decision to recover the sunken ferry Sewol came after months of a technical review to see if it is even possible. The outcome of the review, submitted to the public safety ministry earlier this week, showed pulling the ship out of the water was at least technically possible. Still, the final decision to salvage the ship had required additional consideration, mostly for costs.

The technical review has tabled five available options of techniques in hoisting the sunken ship, though only one of them, using offshore cranes to pull up the ship and place it onto a submersible floating dock, currently stands out.

The ministry earlier said that any of the five techniques will cost a minimum 100 billion won (US$92.32 million) and up to 250 billion won.

The amount will be in addition to the some 185 billion won the government has already spent, mostly on search and rescue operations. An additional 250 billion won has been earmarked for compensation to the victims and their families, as well as residents in areas close to the accident site who had been kept away from their daily jobs while the search efforts continued for seven months after the ship sank on April 16, 2014.