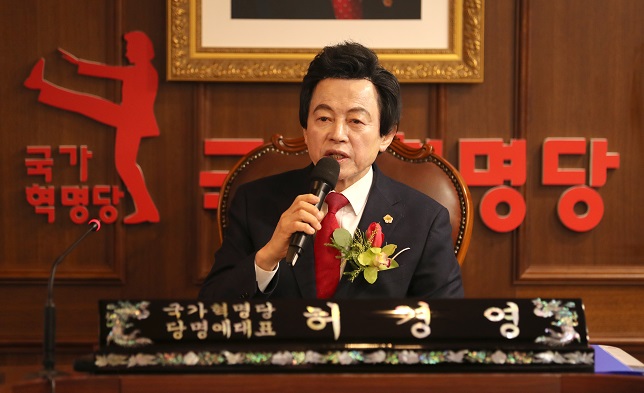 Huh Kyung-young, the presidential candidate of the National Revolutionary Party, holds a press conference for the new year at the party’s headquarters in Seoul on Jan. 3, 2022. (Yonhap)

SEOUL, Jan. 29 (Korea Bizwire) — A minor presidential candidate known for his eccentric campaign pledges and behavior has stopped making phone calls encouraging people to vote following complaints the constant reminders were getting on their nerves.

“Hello, this is presidential candidate Huh Kyung-young,” he said in a prerecorded message played over the phone.

To those who did not hang up immediately, Huh offered words of comfort for their hardships during the pandemic and urged them to vote for change.

By not asking them to vote for him — a self-professed prophet whose repeated bids for the country’s highest elected offices have made him a constant in politics — he could continue to call without breaking the election law.

Some welcomed it, with one person asking on the Naver search engine how they could receive the calls too.

Others complained, however, saying it was not only annoying but disappointing when high school seniors picked up hoping it was an acceptance call from a university or seriously disruptive when hospital emergency rooms were forced to answer the calls.

Huh apologized Monday, saying it was the only way he could make himself known as the news media largely ignored him and pollsters left him out of polls.

“My fellow Koreans, I sincerely apologize if my frequent calling caused you discomfort,” he said in an interview shown on YouTube. “I will not call from now on.”

The voter-calling campaign reportedly cost Huh up to 3 billion won (US$2.49 million).

Regardless of the controversy, multiple polls have recently placed him fourth in the presidential race.

In a Korea Information Research poll conducted Jan. 23, Huh earned 5.6 percent behind Yoon Suk-yeol of the main opposition People Power Party with 42.4 percent, Lee Jae-myung of the ruling Democratic Party at 35.6 percent and Ahn Cheol-soo of the minor opposition People’s Party at 8.8 percent.