“This album is the outcome of our identity and our persistence to go our own way,” the group said during an online press showcase event for the album released worldwide at 2 p.m.

“No Limit” features the six-piece act’s confidence and energy to push their limits and excel themselves, whose first English-language record, “All About Luv,” reached fifth place on the Billboard 200 albums chart last year.

With the feat, Monsta X became the third K-pop act ever, after BTS and SuperM, to make the top five on the prestigious chart.

“Our goal is to keep going,” said rapper I.M. “We take each step at a time. After completing one thing, we eye the next.”

In a bid to challenge their limits, some members have participated in the new seven-track EP as producers, composers and writers.

Rapper Jooheon worked on the title track “Rush Hour” as a co-composer and co-writer, while “Just Love” and “Mercy” were written by I.M. and vocalist Hyungwon, respectively. 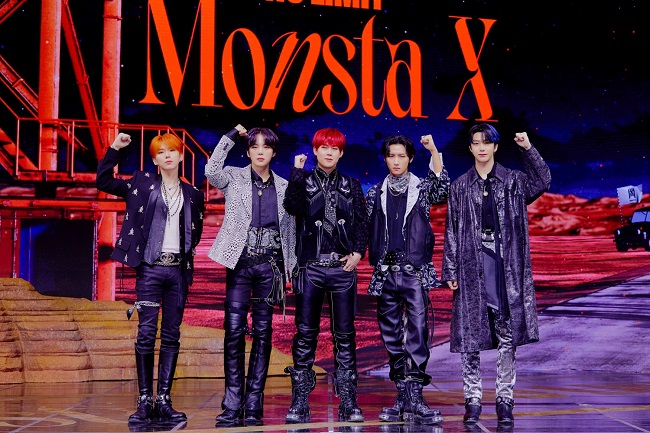 This photo provided by Starship Entertainment shows boy band Monsta X posing for photos during a media showcase for the group’s new mini album “No Limit” streamed online on Nov. 19, 2021.

But only five members of the six-man group will participate in promotional events for the latest album, as leader Shownu enlisted for his mandatory military service in July.

Monsta X will resume its overseas activities next month, including a performance at iHeartRadio Jingle Ball Tour, the largest year-end radio show in the U.S.

And its U.S. in-person concerts will start in Philadelphia on Dec. 13 and continue in Washington D.C., Atlanta and Miami.