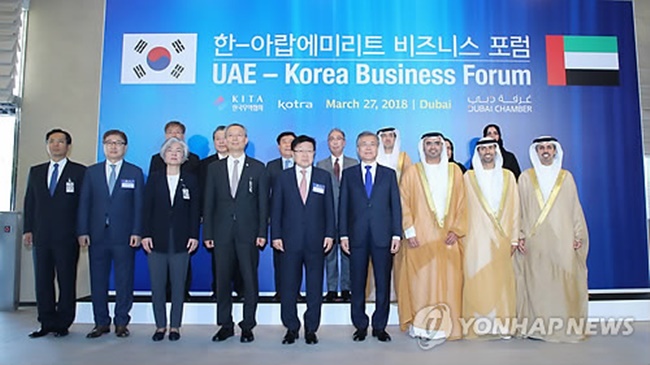 Moon made the call during a business forum in Dubai attended by some 200 business people from both countries.

“I propose we take another step forward,” Moon said. “I wish the two countries will join forces not only to expand investment in renewable energy and foster new energy industries, such as smart grid systems, but also create new success stories by jointly advancing into third markets.”

Earlier Tuesday, he arrived in Dubai and held a meeting with Mohammed bin Rashid Al Maktoum, ruler of Dubai and prime minister of the UAE.

At the forum, Moon enumerated potential areas for increased cooperation between the two countries.

“There is an infinite number of other areas the UAE and South Korea could cooperate,” he said, listing semiconductors, shipbuilding, automated port systems and space development as examples.

“Our future-oriented cooperation will upgrade the economies of both countries,” he said.

“South Korea will now accompany the UAE as a brother and friend on its journey toward the next 100 years. An Arabic proverb says, ‘Choose a companion before embarking on a long journey.’ I ask you to take South Korea as your companion for your long journey.”