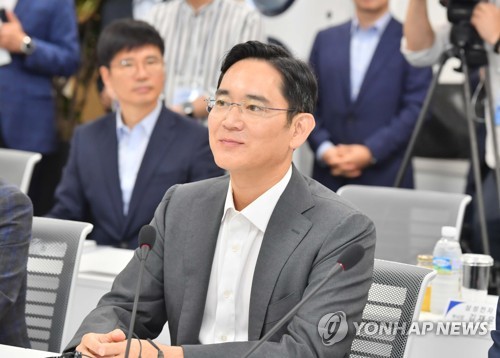 SEOUL, Aug. 9 (Korea Bizwire) — Lee Jae-yong, Vice Chairman of Samsung Electronics, attended only two public functions in the six months following his release from prison when his sentence was suspended on appeal in February.

Lee’s reason for keeping a low profile is said to be due to his urge to focus on discovering new avenues for corporate growth while trying to find ways to recover public trust lost by the political scandal he was associated with last year.

After being released from prison, Lee paid a visit to his convalescent father before taking a week of rest. Immediately afterwards, Lee was briefed by heads of Samsung’s subsidiaries before heading overseas to attend a series of meetings.

Lee’s overseas business trips focused primarily on trying to discover new areas of growth. His first trip to Europe and Canada after his release allowed the Samsung magnate to visit AI-related facilities.

In China, Lee held meetings with corporate leaders of electric car manufacturers and smartphone producers. His visit to Japan had him meeting up with owners of car part manufacturers.

Afterwards, Samsung Electronics set up plans to establish AI research centers in the U.K., Canada and Russia while launching “Next Q Fund,” an early-stage venture fund focused on AI startups.

Lee’s overseas business trip that garnered the greatest media attention after his release from prison, however, came in July when the vice chairman of Samsung paid a visit Noida, India to take part in a ribbon-cutting ceremony at a mobile phone production factory set up by Samsung.

Lee’s meeting with President Moon was followed by a meeting with Kim Dong-yeon, the Minister of Economy and Finance and Deputy Prime Minister.

And on August 8, Samsung released plans to make a “large investment” which exceeded everyone’s expectations.

According to Samsung, the company will make domestic investments of 180 trillion won over a period of three years, and will hire 40,000 new employees.

Sources close to the matter say that the move by Samsung is reflective of Lee’s wish to instill a newfound trust in the company and his recent actions support such claims.

Just after his release from prison, Lee said that Samsung would hire 8,000 subcontractors who are affiliated with the company but not under direct payroll.

Recently, Lee also said he is willing to come to an agreement regarding the controversy surrounding Samsung employees who became ill with leukemia while working at the company’s semiconductor plants, talks which have been ongoing for the last 10 years.