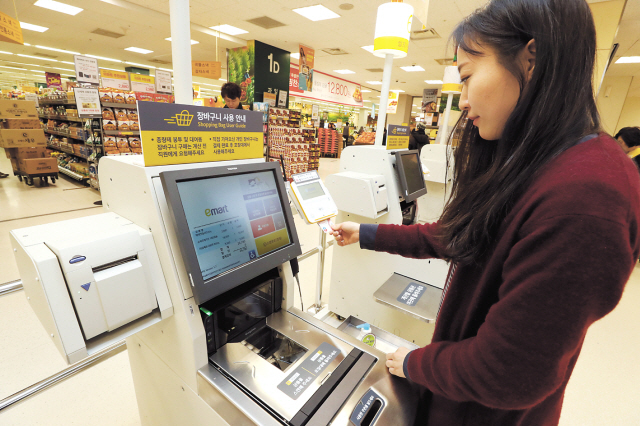 E-Mart Inc., the country’s largest big-box chain operator, first adopted the system in January and said the number of stores with unmanned checkout counters has grown to 40, accounting for 27.8 percent of its total stores.

Yet, the usage rate is still low, with less than 1 percent of total payments made at such counters as of Tuesday, it said.

Lotte Mart, another major discount store chain, adopted the system in April and now has 10 outlets with self-serve checkout counters.

“It was usually those in their 20s and 30s who used the unmanned counters at the beginning, but different age groups are increasingly using them as they become used to the new system,” a Lotte Mart official said.

Lotte Shopping Co. said its aim is to quadruple the number of cashierless counters by the end of this year.

The latest move by the retailers comes as the government is pushing to increase the minimum hourly wage to 10,000 won (US$9) by 2020.

The minimum wage increased 16.4 percent to 7,530 won per hour this year, marking the biggest jump in nearly two decades.