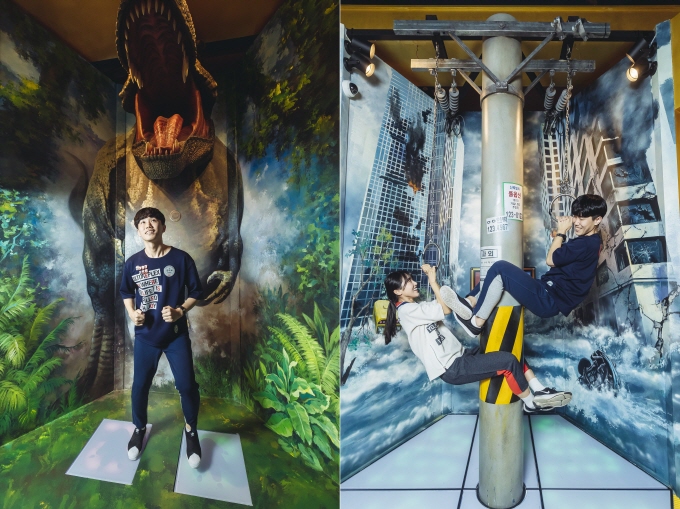 A couple trying to complete the Mission Race game at CGV Incheon, just east of Seoul. In the game, players have to complete 14 missions and pass through a 128-meter-long maze covered with mirrors. (image: Yonhap)

SEOUL, Nov. 2 (Korea Bizwire) — Chu Seung-yup and his three friends, all in their early 20s, looked triumphant when they successfully finished an escape room game at a CGV movie theater in Seoul, late October. The game was what attracted them to the cinema.

The four friends came to Seoul on Oct. 21 from their hometown of Suncheon, 420 kilometers south of the capital city, to visit places frequented by young people, such as popular nightlife district Itaewon and prominent music and arts neighborhood Hongdae.

“We booked a movie at Yongsan CGV because we can play real-life adventures and virtual reality games there. Among other things, there are five escape rooms with different themes to choose from. We escaped a room in only 38 minutes,” Chu, a 22-year-old salaried worker, told Yonhap News Agency.

Escape rooms are a game where two or more players must solve puzzles and crack codes against the clock to break out of a virtual prison, dungeon or other theatrical set. The participants have one hour, though they can leave the room at any time if necessary.

Kim Ji-hye and Jang So-ra, 24-year-old college students, arrived at the same theater on Oct. 21. They chose to have a virtual rafting experience in the cinema’s V Busters zone before seeing a movie.

“I love to watch movies at my place because I am not interrupted by anyone. I am a subscriber of Netflix (the world’s largest online video streaming company) as it allows me to see as many movies as possible on a monthly basis,” Kim told Yonhap.

But with friends, it’s interesting to do an escape room, play VR games, go bowling, enjoy a karaoke room or comic book cafe in addition to seeing a film, said Kim, who studies biotechnology at Chungbuk National University.

These 20-somethings represent changing times for movie theaters, which used to be a top destination for dates.

CJ CGV, Megabox and Lotte Cinema, the country’s three major cinema chain operators, are reinventing themselves to generate growth — or even just to survive — amid tougher competition.

“In the past, people came to theaters just to see a movie. But today, they have nice home theater systems or have very easy access to multiple channels such as Netflix and Internet Protocol television. We have more competitors than before,” Cho Sung-jin, director of the strategic support division at CJ CGV, said.

That’s why the company came up with a two-pronged approach to lure customers to its “Cultureplexes”: one is to provide luxury services and the other is to offer a variety of entertainment facilities within the theater.

For example, CJ GGV has a cinema in Yongsan where customers can enjoy a film on a bed made by Tempur Sealy International, Inc. along with snacks and coffee. This bed-equipped cinema is the first of its kind around the world.

CJ CGV strives to provide a platform for its customers that goes beyond just watching a movie.

“For us, being a Cultureplex means being a modern playground where people can come to experience all different types of culture — from film, music, performances, games, food, drinks and so on,” CJ CGV Chief Executive Seo Jung said at CinemaCon 2018 in Las Vegas in April.

Smaller rivals Lotte Cinema and Megabox are making similar efforts. They are now offering premium services such as a beer bar inside the cinema and a private cinema that can be rented out to a small groups for parties or other gatherings.

“As we see a growing number of channels for movies, we are also planning to add VR and other facilities to the cinema in order to have customers stay long before or after their movie times,” a Lotte official said. 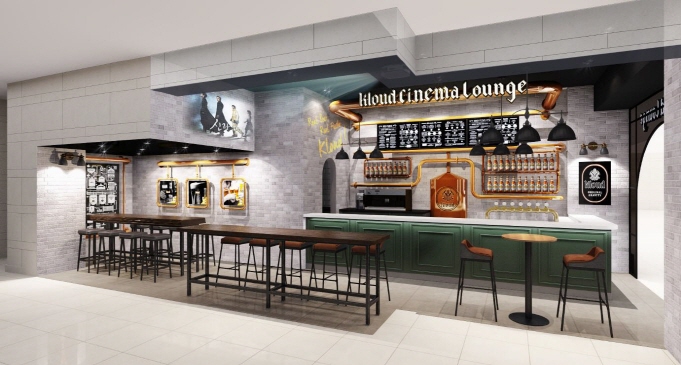 In recent years, local movie theater firms have witnessed their earnings slowing down or remaining weak. This new transformation drive is aimed at propping up their bottom line in the long term.

South Korea is still a major movie market where people annually watch an average of 4.25 movies per person at the cinema, just after Iceland’s 4.3 movies. The per-capita movies seen by the average Singaporean reached 3.9 per year, while the number was 3.7 for Australia and 3.4 in the United States, the Korean Film Council said. It cited data from IHS Markit, a London-based market research firm.

But Korean moviegoers, particularly those in their 20s and 30s, increasingly want fun and thrills besides simply gazing at the silver screen for two hours, and this will surely affect theater profits going forward.

Reflecting such industry developments, CJ CGV’s net losses deepened to 17 billion won (US$15 million) in the first half of the year from 9.9 billion won a year earlier, as a strong won resulted in heavy foreign-exchange losses. On the other hand, Megabox’s net income rose 29 percent to 8.48 billion won from 6.55 billion won during the same period. Lotte Cinema didn’t provide its earnings figures for the six-month period.

As of Friday, CJ CGV operates 486 theaters, including 334 overseas. Lotte Cinema has 172 theaters, 53 of them in other countries. Megabox runs 100 theaters in South Korea only.

To secure a new growth driver, CJ CGV and Lotte Cinema said they are planning to expand their multiplex cinemas in highly potential emerging markets such as Vietnam and China in coming years.

According to Choi Jun-sung, an analyst at Samsung Securities Co., substantive changes to the companies’ existing movie-centered business models appear to be inevitable if they want to survive.