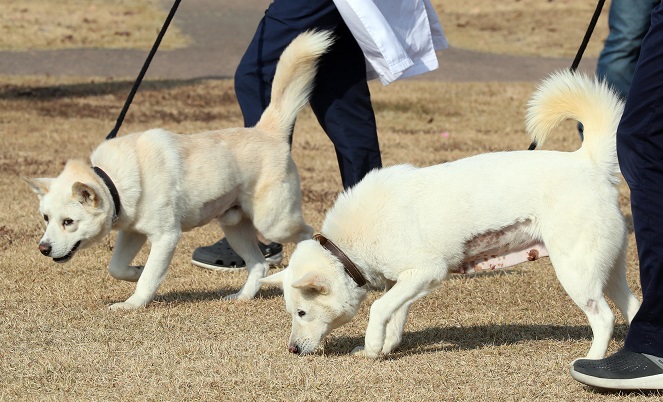 GWANGJU, Dec. 9 (Korea Bizwire) — A pair of dogs that were gifted to former President Moon Jae-in by North Korean leader Kim Jong-un have found a new home at a public zoo in the southwestern city of Gwangju, officials said Friday.

Moon returned the dogs to the government early last month, citing legal grounds and a lack of support.

The indigenous North Korean Pungsan-breed dogs, one male named Songkang and a female named Gomi, were given by the North’s leader after an inter-Korean summit in Pyongyang in 2018.

Despite the Presidential Records Act that mandates government property, such as the North Korean dogs, to be returned to the Presidential Archives after retirement, the pair had stayed with Moon after his tenure due to an absence of facilities to breed them and views it will be better for animal welfare.

Moon, however, returned the dogs to the government claiming the current administration is not amending an enforcement ordinance of the Act that would allow him to raise the dogs with necessary support, as promised.

On Friday, Gwangju city government officials said the Presidential Archives has requested Songkang and Gomi to be relocated to Uchi Park Zoo in Gwangju, 330 kilometers southwest of Seoul, where their puppy, Byul, is residing.

The zoo run by the municipal government has begun preparations to welcome the dogs, such as making their den and selecting a zookeeper to take care of them.

The zoo plans to relocate the dogs as soon as ongoing preparations are complete, according to officials.

The zoo plans to place the dogs under special management to prevent issues, like theft, and allow limited viewings for visitors even after their initial transition period.