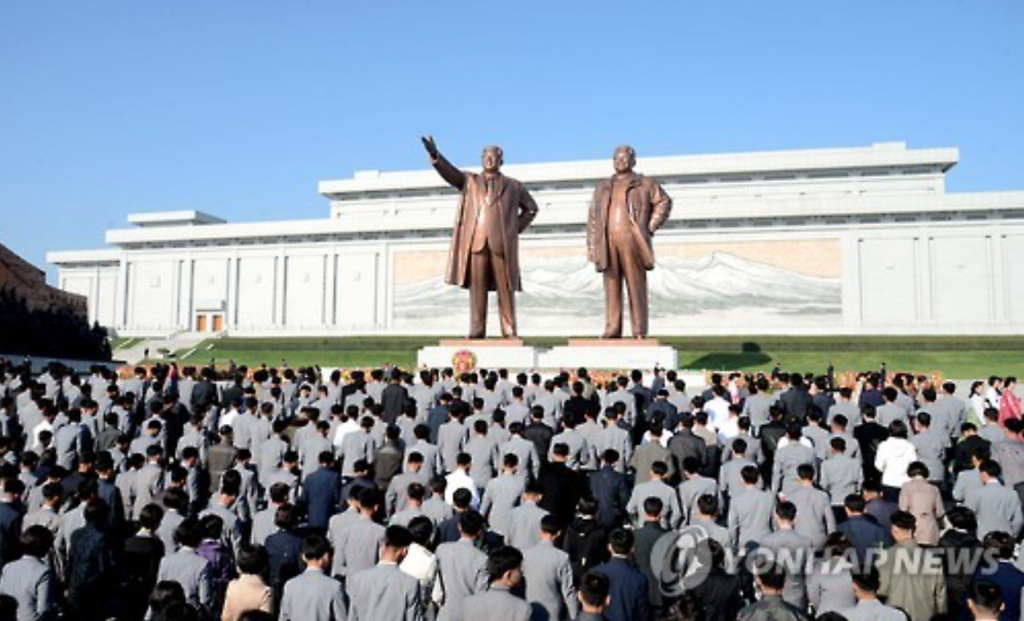 North Koreans pay tribute at the statues of the country’s former leaders in Pyongyang to mark the 71st founding anniversary of the ruling Workers’ Party of Korea. (image: Yonhap)

The North plans to hold a gathering to praise the accomplishments of the Kim family at Mt. Baekdu, the highest peak on the Korean Peninsula, and in Pyongyang next year, according to the Korean Central News Agency (KCNA).

North Korea’s founder Kim, his son Kim Jong-il and the North’s current leader Kim Jong-un are called the Mt. Baekdu bloodline in the country, which helps reaffirm the legitimacy of the Kim family’s three-generation succession.

The KCNA said that next year will be important as it marks the 105th anniversary of the late founder’s birthday and the 75th birthday of Kim Jong-il who died in late 2011 due to heart failure.

The year of 2017 will also mark the fifth anniversary of the current leader Kim Jong-un being elected to the first secretary of the ruling Workers’ Party of Korea (WPK). At a party congress in May, Kim’s title was changed to the WPK’s chairman.

The KCNA said that colorful political and cultural events should be held throughout next year to praise the young leader.

The move is seen as North Korea’s bid to break away from international isolation while promoting the Kim Jong-un’s regime by highlighting his one-man leadership.

North Korea has strengthened the personality cult of the current leader since Kim took office in December 2011 following the sudden death of his father.

The North’s media said that Kim Ki-nam, a vice chairman of the WPK’s central committee, and former Nepalese Prime Minister Madhav Kumar will serve as honorary chairmen of a preparatory committee for the event.

It also said that the second daughter of Indonesia’s first president Sukarno and Kim Jong-suk, the head of North Korea’s committee on cultural relations, will work as co-chairpersons.

An official at Seoul’s unification ministry said that the North wants to promote that foreign figures are backing the event designed to praise the Kim family to the outside world.

“It seems that foreign figures mentioned in the report are supporting the event on a personal level, not on a national level,” the official said. “In the face of international sanctions, North Korea appears to use foreigners to show that the Kim family’s appeal is gaining momentum outside the country.”