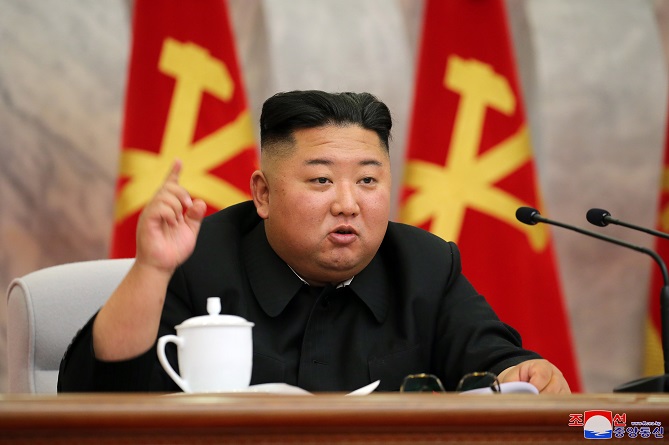 Earlier in the day, the official Korean Central News Agency reported that leader Kim Jong-un presided over a preliminary meeting of the Central Military Commission of the Workers’ Party and decided to suspend military action plans.

The decision came as a surprise because the North had widely been expected to convene a meeting of the Central Military Commission of the ruling Workers’ Party to endorse a series of military measures, such as redeploying troops to border areas, to punish the South over anti-Pyongyang leaflets.

Experts said the North appears to be dialing back on its threats after determining that their intended purposes have already been achieved and any further escalation of tensions could hurt its already struggling economy.

“The North most likely decided to take a breather (from provocations) because it knows it won’t do any good if its military action leads to an armed conflict,” Yang Moo-jin, a professor at the University of North Korean Studies, said.

“It must have decided it achieved the effect of uniting the people in North Korea to a certain degree,” Yang said.

Kim Dong-yeob, a professor at Kyungnam University’s North Korean studies school, also pointed out the economic challenges within the North, saying further provocations and tensions could end up adding pressure on its economy.

North Korea has intensified its drive to achieve a “frontal breakthrough” to tackle economic challenges after Kim said in December that he expected no easing in global sanctions amid a deadlock in talks with the United States.

In this combined photo, taken from an observatory on South Korea’s Ganghwa Island on June 24, 2020, a propaganda loudspeaker is seen removed (right) in the North Korean town of Kaepung on the western front-line border with South Korea. The loudspeaker was spotted the previous day (left). (Yonhap)

“At a time when the North is trying to achieve a frontal breakthrough in its economy, it must have decided that heightening external tensions excessively will not have a positive effect,” Kim said.

“It appears to be dialing down its actions against South Korea to a level that is enough to encourage its own people … it is also waiting to build a clear justification for their military action,” he said.

Yang also pointed out that the recent release of former U.S. National Security Adviser John Bolton’s memoir may have affected the North’s decision to take a more cautious approach.

“North Korea may be taking a breather from provocations to see the response of the international community regarding Bolton’s book,” he said.

Experts said that inter-Korean relations do not appear to have reached the point where the 2018 inter-Korean summit agreement is “a dead document” as claimed by the North.

But experts also warned authorities to keep a watchful eye for further provocations as the North said it will only “suspend” military action plans rather than scrapping them.

“If North Korea increased military deployments near the border, reactivated propaganda speakers and sent leaflets toward the South, these would be means of demonstrating that it considers the Comprehensive Military Agreement null and void,” said Leif-Eric Easley, associate professor of international studies at Ewha Womans University in Seoul.

He was referring to a military tension reduction agreement the two Koreas signed when President Moon Jae-in and the North’s leader held their third summit in Pyongyang in September 2018.