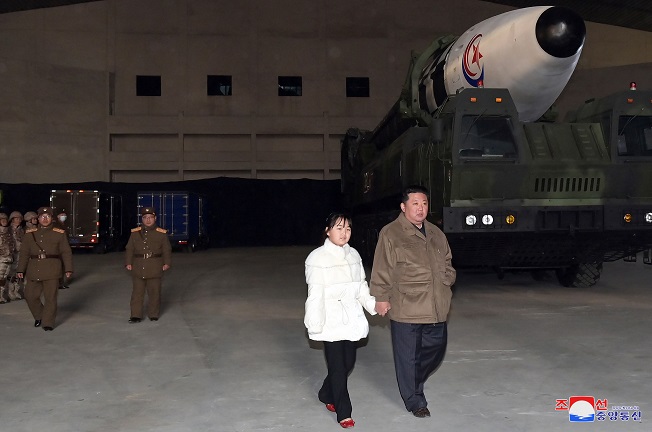 North Korean leader Kim Jong-un (R), alongside his daughter wearing a winter jacket, views a new type of the Hwasong-17 intercontinental ballistic missile (ICBM) during an on-site inspection of the missile launch at Pyongyang International Airport on Nov. 18, 2022, in this photo released by the North’s official Korean Central News Agency. (Yonhap)

The North’s state media reported that Kim inspected the launch of a Hwasong-17, the country’s largest ballistic missile, at Pyongyang International Airport on Friday.

He was present at the scene “together with his beloved daughter and wife,” the North’s official Korean Central News Agency said.

Photos released by the news agency showed his daughter in a white winter jacket and black pants standing and walking together with Kim in front of the missile that sat on a launch truck.

The daughter apparently in her tweens was also seen along with her mother, Ri Sol-ju, watching her father as he instructed military officials.

It marked her first official appearance in state media.

North Korea has never confirmed the existence of Kim’s children. South Korean intelligence speculated Kim and his wife married in 2009 and have two daughters and one son, born in 2010, 2013 and 2017. 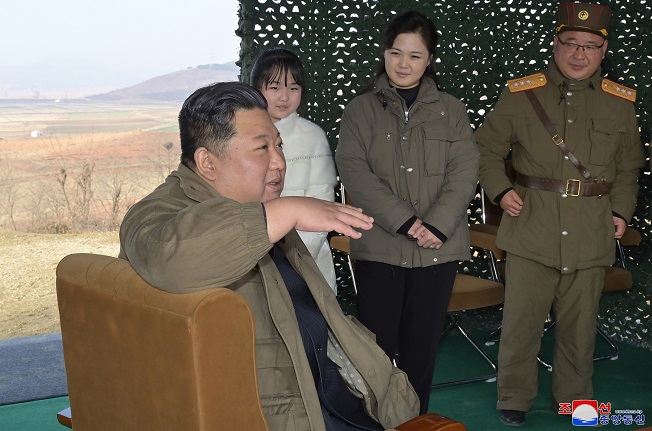 North Korean leader Kim Jong-un (front), accompanied by his wife Ri Sol-ju (C, rear) and his daughter (L, rear), speaks during the launch of a new type of the Hwasong-17 intercontinental ballistic missile (ICBM) at Pyongyang International Airport on Nov. 18, 2022, in this photo released by the North’s official Korean Central News Agency. (Yonhap)

Observers say the revelation of Kim’s child suggests his confidence in the missile test’s success and the regime’s security.

“It indicates his confidence in the ‘Paekdu bloodline’ (of North Korea’s ruling family) and the success of the missile test while emphasizing the importance of national security,” said Yang Moo-jin, president of University of North Korean Studies.

The KCNA reported Kim declared a resolute nuclear response to threats by the United States during the on-site inspection.

“The test-fire clearly proved the reliability of the new major strategic weapon system to be representative of the DPRK’s strategic forces and its powerful combat performance as the strongest strategic weapon in the world,” it said in an English-language report.

The DPRK is the acronym for the North’s official name, the Democratic People’s Republic of Korea.

Kim was quoted as saying that the launch of the ICBM has reaffirmed his regime’s acquisition of a powerful and reliable capability to counter any nuclear threat.