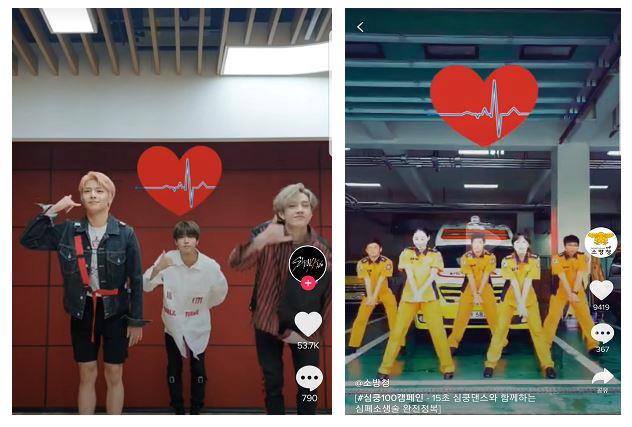 The campaign will proceed with a “Heart Racing Dance,” which expresses cardiopulmonary resuscitation methods. Users will post short video of themselves dancing on Tik Tok, the popular short-video platform.

The choreography for the “Heart Racing Dance” was performed by K-pop boy band Stray Kids.

CPR, which is used to resuscitate individuals experiencing cardiac arrest by performing compressions in the middle part of the chest with one’s clenched hands, was presented in a cheerful rhythm.

As a background music for the campaign, “Fuego” by EDM DJ Junkilla, the music director of the PyeongChang Olympic Stadium, was used. The word ‘fuego’ means ‘fire’ in Spanish.

The song used a BPM of 100, to indicate that performing chest compressions 100 times per minute is effective when performing CPR.

Meanwhile, anyone can participate in the campaign through ‘Tik Tok’.

Furthermore, if you search for the “#Heart Racing 100″ Challenge on Tik Tok, you can see a heart racing dance video posted first by Stray Kids and firefighters.

“The initial treatment of those closest to the patient as well as the 119 aid workers is critical to raising the resuscitation rate of patients in cardiac arrest,” said Cho Sun-ho, a spokesman for the NFA.

The spokesman further added that “I hope more people will learn CPR with this campaign.”