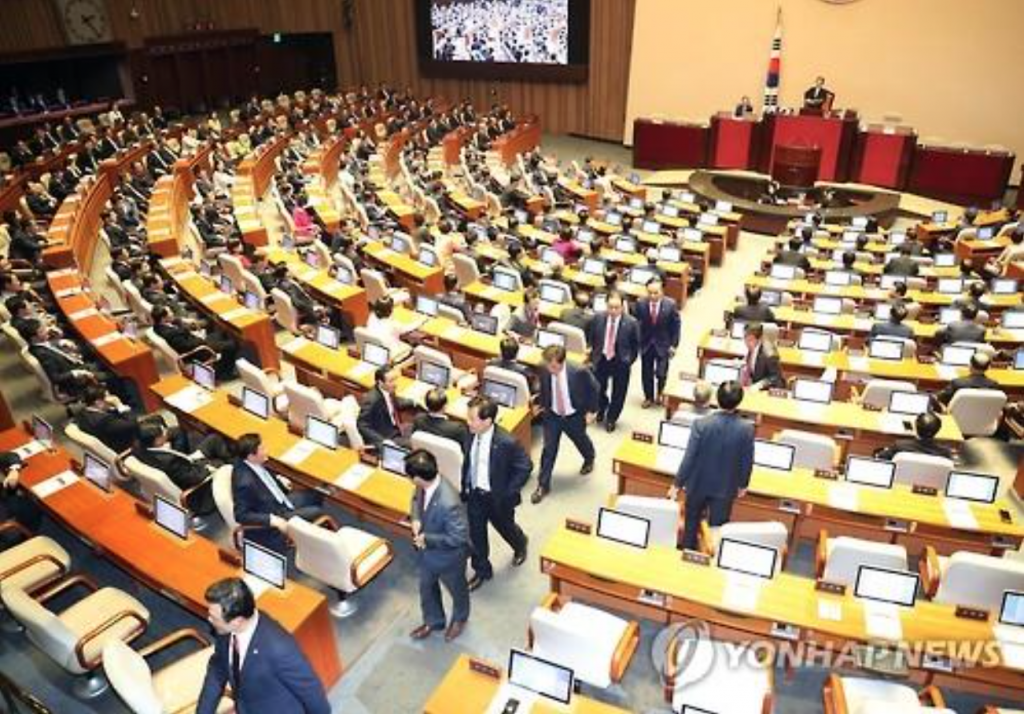 The Saenuri Party, as well as the Minjoo Party of Korea and the People’s Party, have been at odds over the Terminal High Altitude Area Defense (THAAD) system that Seoul agreed to host in July.

The conservative Saenuri claims the system is vital to tackle North Korea’s developing missile provocations, while Minjoo and the People’s Party stress Seoul should refrain from taking steps that would make Beijing uncomfortable.

During the opening speech, National Assembly Speaker Chung Sye-kyun, originally from the main opposition party, lent support to Minjoo’s stance on the deployment of the THAAD system.

“The government’s attitude towards THAAD cannot win approval,” National Assembly Speaker Chung Sye-kyun said during the opening speech of the session. “Regardless of the inevitability of the THAAD, there has been no communication from inside. This resulted in the division of the public opinion and confusion among the people.

“Although there needs to be an appropriate response to North Korea’s reckless actions, we should try to avoid the current situation where Seoul and Pyongyang are taking extreme measures, Chung added.

Immediately after the remark, Saenuri vowed to refuse participation to all parliamentary events, calling for Chung to make an official apology.

“The speaker is obligated to maintain a neutral manner and should not have spoken mirroring the opposition party’s views,” Chung Jin-suk, the floor leader of Saenuri, said, adding the remark “cannot be tolerated.”

“Unless the speaker makes an appropriate apology, as well as take follow up measures to prevent a repetition, Saenuri will refuse to join all schedules of the 20th National Assembly,” the party whip added.

Amid the rising anger among the ruling party’s lawmakers, the speaker’s office released a separate statement later on Thursday, adding the remark was not intended as a protest against the THAAD system itself, but to urge the government to consider the opinions of the people.

Saenuri, however, currently plans to seek the dismissal of Chung for failing to maintain political neutrality.

Political pundits earlier expected the regular session will face bumpy roads amid the prolonged tension among parties over key issues, such as the missile defense system, as well as next year’s budget, especially ahead of the next presidential election set for late 2017.

Choo Mi-ae, newly elected head of Minjoo, also implied she will make some progressive changes to the party’s policies, compared with her neutral predecessor Kim Chong-in.

Following the latest development of the firing off of submarine launched ballistic missiles (SLBM) by Pyongyang, Saenuri is also anticipated to announce more aggressive measures to tackle the provocations, including building nuclear-powered submarines.

Besides the Chung’s remarks, the scheduled hearings on financially troubled shipbuilders and shippers can potentially act as hurdles for the new session of parliament.

The National Assembly will hold audits on core diplomatic, security, social and economy issues from Sept. 26 to Oct. 15. They will also finalize next year’s budget plan by Dec. 2.

While the ruling Saenuri Party controls 129 seats, it failed to secure a majority in the 300-seat parliament.

Pundits said the inability of one party to pass laws may hold up key debates and the legislative process.