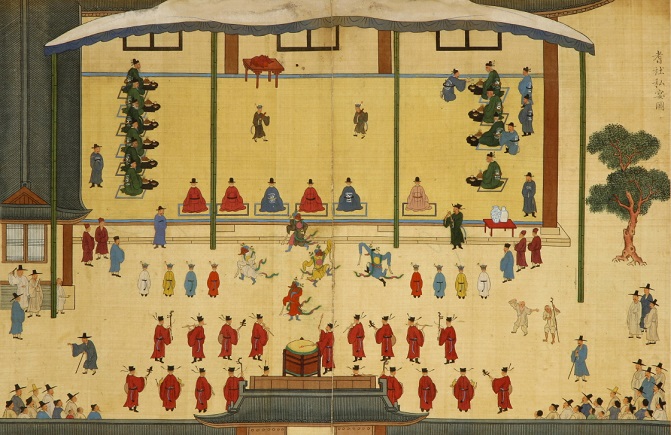 An image of “Gisa Gyecheop” (Album of Paintings of the Gathering of Elders) to be put on display at special exhibition “New National Treasures 2017-2019″ from July 21-Sept. 27 at the National Museum of Korea in Seoul.

SEOUL, July 20 (Korea Bizwire) — Nearly 200 cultural items recognized as state treasures in recent years will be brought together for a special exhibit at the National Museum of Korea (NMK), the museum said Monday.

The exhibit, “New National Treasures 2017-2019,” will open on Tuesday and run until Sept. 27 at NMK in central Seoul. The exhibition is co-organized with the state-run Cultural Heritage Administration (CHA).

The exhibit will be the largest-ever in South Korea of its kind in terms of the number of treasures to be showcased.

Outside of state-possessed heritage items, organizers have borrowed items owned by private galleries, such as the Kansong Art Museum.

National treasures are chosen among those deemed to have exceptional artistic, cultural and historical value to the country.

Hard-to-access cultural heritage items, including the Annals of the Joseon Dynasty (1392-1910), “Painting of Endless Mountains and Rivers” by Joseon-era painter Yi In-mun, “Miindo” by painter Shin Yun-bok and reliquaries from the Wangheung Temple site from the Baekjae era in Buyeo, South Chungcheong Province, will be put on public display.

NMK said that the exhibit will be operated through a reservation system in order to prevent the spread of the new coronavirus. Up to 200 people will be permitted to enjoy the exhibition in subsequent two-hour viewing sessions, the museum said.

“We’re pleased to see our precious cultural heritages engrained with 5,000 years of history brought together in one space,” Chung Jae-suk, head of CHA, said at a press conference for the exhibition.