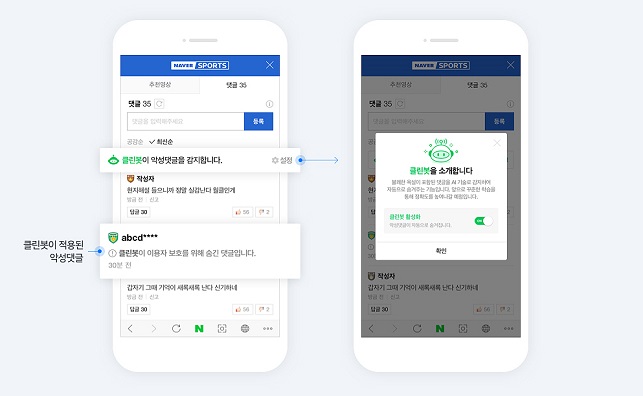 Naver’s upgraded AI cleanbot will expand its discretion standard on judging whether comments are malicious or not by moving beyond the words themselves to analyze context. (image: Naver)

Since April 2019, the AI cleanbot has been added to Naver’s webtoon, Junior Naver, sports and news websites on a step-by-step basis.

From now on, however, Naver’s upgraded AI cleanbot will expand its discretion standard on judging whether comments are malicious or not by moving beyond the words themselves to analyze context.

Even if there is no slang or abusive language in comments, the AI cleanbot can hide comments if the context of the comment is judged to be insulting or rude.

Once they are identified as habitual offenders by the AI cleanbot, they are prevented from using Naver’s comments service for a specific period of time.

Naver is now working on a new policy with a focus on limiting the number of comments and likes habitual offenders can click.

“Given that even a single slang phrase can have more than 100,000 variations, it’s difficult to fully eradicate malicious comments simply with the AI cleanbot,” Naver officials said.

“However, we’ll continue our efforts to further upgrade the precision of our AI cleanbot on the basis of various AI models and big data learning.”