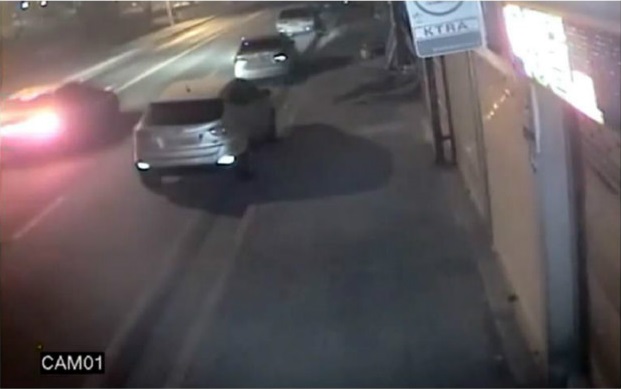 Police investigators are having difficulty pinpointing the vehicle and the driver, as there were no witnesses, it was a dark night, and images from CCTV footage were of poor quality. (image: Bobaedream)

SEOUL, Jan. 28 (Korea Bizwire) – On January 10, a man was walking home after purchasing some cream bread for his pregnant wife. Sadly, he never made it back to his family, as he was hit by an unknown driver, and died soon after. The driver responsible for the accident fled the scene, and is still at large.

Police investigators are having difficulty pinpointing the vehicle and the driver, as there were no witnesses, it was a dark night, and images from CCTV footage were of poor quality.

Under these unfortunate circumstances, and amidst widespread condemnation of the driver’s actions, members of an Internet automobile community are rolling up their sleeves to help find the driver in what has come to be known as the “cream bread hit-and-run” case.

On January 26, a user of the site Bobaedream (www.bobaedream.co.kr) posted a story titled “Verifying plate number of the cream bread case”, which contained a careful analysis of the suspected car. Based on the poor definition CCTV images, he measured the distance between the wheels, the location of the brake lights, the car’s window line, and its plate number.

According to the post, the plate number of the suspected car begins with 1, 5 or 6 and finishes with 3 or 5. Users of the site guess that the vehicle is highly likely to be a BMW 5 Series sedan. However, others argue that it could be a BMW 7 Series based on its wheelbase.

Last May, users of the site helped police catch a car thief who stole a Maserati luxury sedan in Gangnam. They showed persistence in tracking evidence of the car thief, contributing information that led to his eventual arrest in Jeongseon, Gangwon Province. Having established a precedent, they are expected to offer clues that might help to put a criminal behind bars once again.

Meanwhile, the deceased victim, surnamed Kang, called his wife just 10 minutes before the accident and reportedly said, “I’m sorry that I could not buy your favorite cake. Instead, I bought cream bread. Although we are poor, we should be good parents for our baby.”

After analyzing the CCTV images, the police have concluded that the vehicle in question was a BMW 5 Series, and are seeking its whereabouts by investigating auto-repair shops.