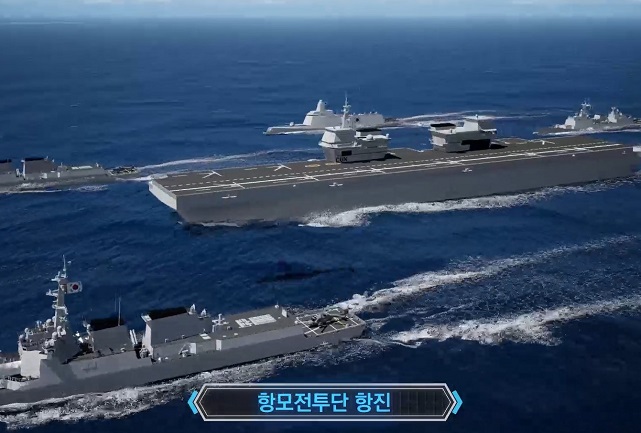 Shown in this image released by the Navy on Nov. 8, 2021, is a rendering of South Korea’s first light aircraft carrier, which is expected to be built by 2033.

SEOUL, Dec. 3 (Korea Bizwire) — South Korea’s Navy looks set to embark on a long-cherished project next year to secure a light aircraft carrier, as the National Assembly passed a 7.2 billion won (US$6.1 million) budget for the project Friday in a reversal of an earlier move to slash it.

The legislature passed the budget in a plenary vote, reversing a committee-level decision last month to reduce it to 500 million won — a drastic cut that threatened to derail the Navy’s push to acquire the coveted vessel by 2033.

With the budget, the Defense Acquisition Program Administration (DAPA) is expected to begin a process next year for the basic design of the envisioned carrier, according to DAPA and Navy officials.

The parliamentary decision to salvage the outlay came as the presidential office Cheong Wa Dae and the leadership of the ruling Democratic Party reportedly worked together to keep it alive. The project is one of President Moon Jae-in’s election pledges.

During a March event marking the West Sea Defense Day commemorating Navy sailors’ contributions to maritime security, Moon reiterated his hope for the procurement of a 30,000-ton carrier.

A Navy official told reporters on condition of anonymity the armed service will do its utmost to ensure the project would proceed as planned in due consideration of various opinions presented during the budget deliberation process.

The Navy has been pushing for the carrier acquisition to respond to a wide range of maritime threats, including those from North Korea, and the potential security challenges beyond its shores in a region surrounded by major maritime powers, such as China and Japan.

Critics, however, often describe aircraft carriers as “floating coffins,” as they can be easily exposed to advanced anti-ship missiles, torpedoes and other weapons, though proponents say the carrier can still be a symbol of the country’s growing naval might and of national pride.

Some also point out for the stable implementation of a carrier-based maritime strategy or doctrine, the Navy needs to secure more than one carrier strike group given that a carrier needs a fill-in when its service is on hold for maintenance and repairs on a regular basis.

Meanwhile, the National Assembly passed the 2022 defense budget of 54.61 trillion won, up 3.4 percent from a year earlier. Of the total, 37.91 trillion won is set aside to run military forces, with 16.69 trillion won set for improving defense capabilities.