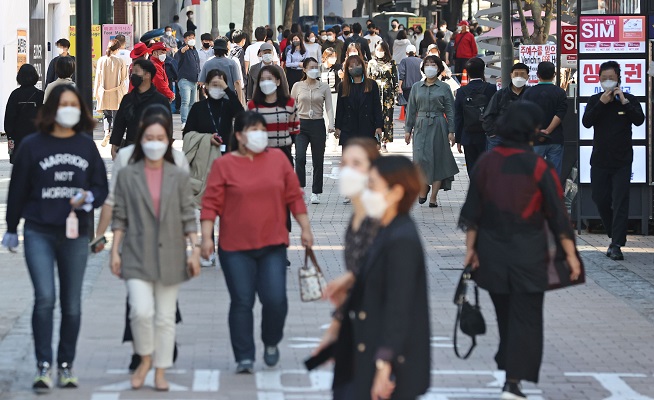 Myeongdong Street in central Seoul bustles with people during lunch time in this photo taken on Oct. 13, 2021. (Yonhap)

However, more than 60 percent of those surveyed said social media is still a good thing for the country’s democracy, according to the survey conducted by Pew Research Center, a nonpartisan think tank based in Washington.

“Around half or more in almost every country surveyed think social media has made people more divided in their political opinions,” the think tank said in its report.

“The U.S., South Korea and the Netherlands are particularly likely to hold this view,” it added.

In South Korea, 77 percent of those surveyed said social media leads to more political division, the third highest after the U.S. and the Netherlands, with 79 percent and 78 percent, respectively.

The annual survey was conducted from Feb. 14 to June 3 in 19 countries, including Britain, Germany, Japan and France, involving a total of 20,944 people aged 18 years or older, according to the Pew Research Center.

The 19-country median for the question on whether social media leads to more political divide was 65 percent.

The survey showed there also exists a widespread concern in every country over the spread of misinformation through social media.

When asked if the internet and social media have made it easier for people to manipulate others with misinformation, 78 percent of 1,008 South Koreans surveyed answered yes. The 19-country median is at 84 percent.

Being connected, however, is also deemed a good thing in most countries, including South Korea.

Seventy-seven percent of those in South Korea said social media has made people more informed about current events.

Also, 61 percent of those surveyed in South Korea said social media has generally been a “good thing” for democracy, slightly higher than the 19-country median of 57 percent.