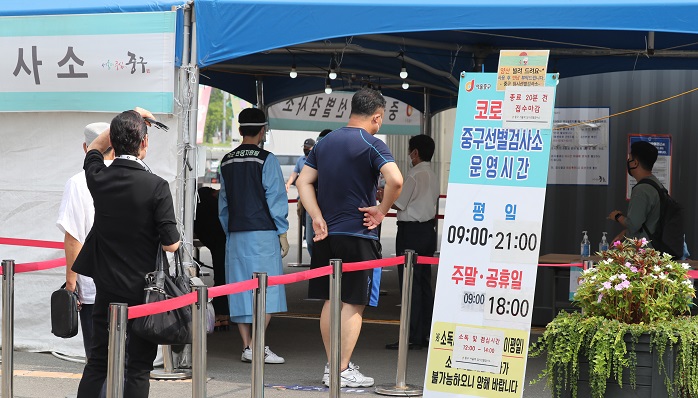 SEOUL, Aug. 12 (Korea Bizwire) — South Korea’s daily new coronavirus cases fell back below 2,000 on Thursday, but the peak of the current wave of the pandemic has not yet come amid calls for tougher measures to bring virus infections under control and slow vaccinations.

The country added 1,987 COVID-19 cases, including 1,947 local infections, raising the total caseload to 218,192, according to the Korea Disease Control and Prevention Agency (KDCA).

The daily caseload was down 236 from 2,223 the previous day, the largest since the outbreak of the pandemic here in late January last year.

The country added three more deaths from COVID-19, raising the death toll to 2,138.

As of 9 p.m., health authorities and local governments reported 1,851 new cases, up 18 from the same time Wednesday.

Of the total, 1,134, or 61.3 percent, were reported from the greater Seoul area, including 524 in the capital and 517 in the surrounding Gyeonggi Province.

The latest tally raised the possibility that the country may post daily cases of around 2,000 on Friday. Daily new cases are counted until midnight and announced the following morning.

Despite the toughest social distancing measures having been in place for more than a month, the fourth wave of the pandemic has not shown signs of letup, prodding health authorities to consider more enhanced virus curbs.

The authorities cited increased travel during the summer season and the fast spread of the highly transmissible delta variant as the reason for the recent surge.

The greater Seoul area, the epicenter of the latest wave of the outbreak, has been under Level 4 distancing measures, the highest in the country’s four-tier system, since July with most other areas being under Level 3. 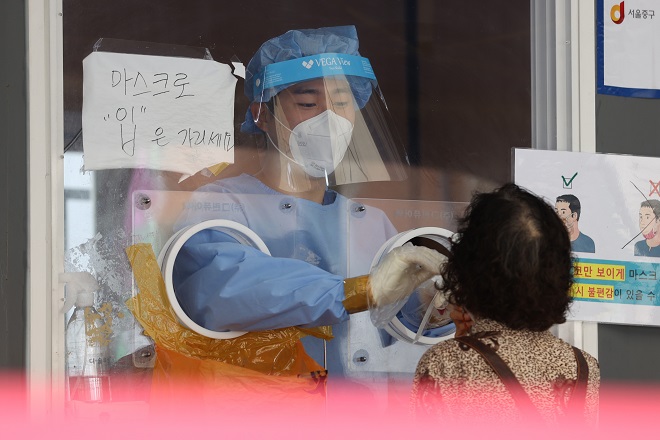 A medical staff member collects specimens from a person for COVID-19 testing at a screening station in Seoul on Aug. 11, 2021. (Yonhap)

Amid the spiking cases, the country’s vaccination rate has been slow, mainly due to problems in securing vaccines on time.

In response to concerns over whether the current distancing measures are too loose to curb the virus spread, the authorities said they will cooperate with relevant government ministries to take necessary measures.

A government delegation plans to leave for the United States on Friday to discuss ways of resolving a delayed supply of vaccines from Moderna, the authorities added.

Moderna has notified the government that its supply of 8.5 million doses of vaccine for August will be cut to less than half of that, sparking concerns that the country may face a vaccine shortage.

Since the country launched its vaccination program in late February, a total of 21.81 million people, or 42.5 percent of the country’s 51.34 million population, have received their first shots of COVID-19 vaccines.

Around 16 percent, or 8.22 million people, have been fully vaccinated, according to KDCA data.

Advance reservations for vaccinations for people aged 18 to 49, estimated at some 16 million, started on Monday.

As of midnight on Thursday, 2.71 million people made reservations for their vaccine jabs, representing 56.4 percent of 4.8 million people for the age group to be inoculated.

Of the locally transmitted cases, 522 were reported in Seoul, with the surrounding Gyeonggi Province adding 570, and the western port city of Incheon confirming 109 more new cases.

There were 40 cases from overseas arrivals.

The total number of people released from quarantine after making full recoveries was 190,535, up 1,029 from a day earlier.