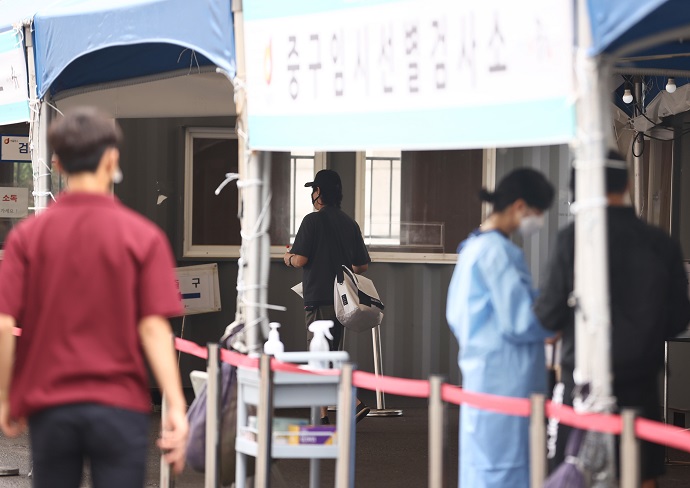 Citizens undergo a COVID-19 test at a temporary test center near Seoul Station on June 26, 2021, as the country’s daily virus tally surpasses 600 for the fourth consecutive day. (Yonhap)

The country’s daily infection tally had stayed below the 600 number since June 11, but the number rebounded and has stayed over the mark since Wednesday as new cluster infections involving education institutes, churches and entertainment facilities pop up across the country.

New imported infection cases are also continuing to flow in.

Of the total infection cases Saturday, 57 were imported cases, including 18 from Uzbekistan, the second-highest daily figure since a record high of 86 imported cases were posted on July 25 last year.

As of 9 p.m. Saturday, the country added 540 new infection cases, down 42 from the same time the previous day. Of them, 430 came from Seoul and its adjacent areas.

The health authorities are on edge in particular over the steady growth in cases of the highly contagious Delta variant of the coronavirus as the country is set to relax its antivirus distancing rules.

Since reporting the first local cases of the Delta variant in April, its total caseload had risen to 190 as of June 19. 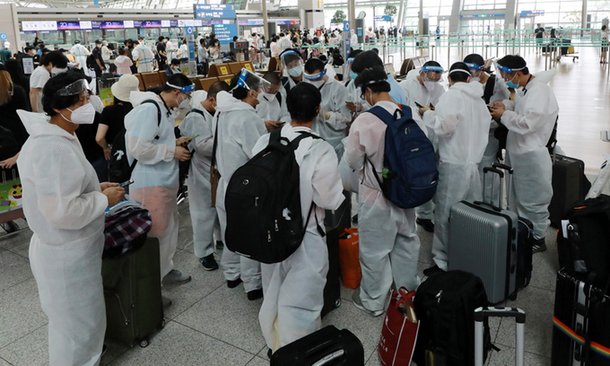 Travelers, clad in hazmat suits and face shields, prepare to check in for outbound flights at Incheon International Airport, west of Seoul, on June 24, 2021. (Yonhap)

The recent uptick in daily new cases and concerns about the Delta variant’s spread came as South Korea is to implement a new social distancing regime July 1, aimed at allowing businesses to extend operating hours and easing restrictions on social gatherings in accordance with the country’s accelerating vaccination drive.

The greater Seoul area is now under Level 2 distancing in the current five-level scheme, while the rest of the country is under Level 1.5. Private gatherings of five or more are banned nationwide.

Currently, restaurants and cafes are allowed to run till only 10 p.m., while the operations of bars and other nightlife establishments are suspended.

The nationwide ban on gatherings of five or more people will also be lifted under the renewed guidelines, with the ceiling expected to go up in stages to eight.

In regions outside of the capital area, where Level 1 will be applied in the new four-tier system, all restrictions on business operations and on the size of social gatherings will be abolished.

The government plans to fix the final distancing level of each region at a COVID-19 response meeting Sunday afternoon and announce them the same day.

As of Saturday, a total of 15.26 million people, or 29.7 percent of the country’s 51.3 million population, have received their first shots of COVID-19 vaccines since the vaccine rollout in late February.

Of them, 4.6 million, or 9 percent of the population, were fully inoculated, according to the KDCA.

The number of people who reported abnormal reactions after vaccination came to 83,832, up 7,723 from the previous tally released Wednesday. More than 95 percent of them, however, were minor symptoms, such as headaches and fever.

A total of 334 cases of deaths after inoculation have been reported so far, although health authorities have only acknowledged one case linked to vaccination.

This includes deaths of 24 people, reported between Wednesday and Friday, all of them in their 60s to 90s, according to health authorities.

The country aims to inoculate 36 million with at least one jab by September in order to achieve herd immunity by November.

Of the newly confirmed domestic cases, 260 came from Seoul and 185 from Gyeonggi Province that surrounds the capital. The southern port city of Busan added 28 cases.

The number of patients in serious or critical condition came to 149, up six from the previous day.

The total number of people released from quarantine after making full recoveries was 145,989, up 600 from a day earlier.

South Korea has so far carried out 10.49 million COVID-19 tests.