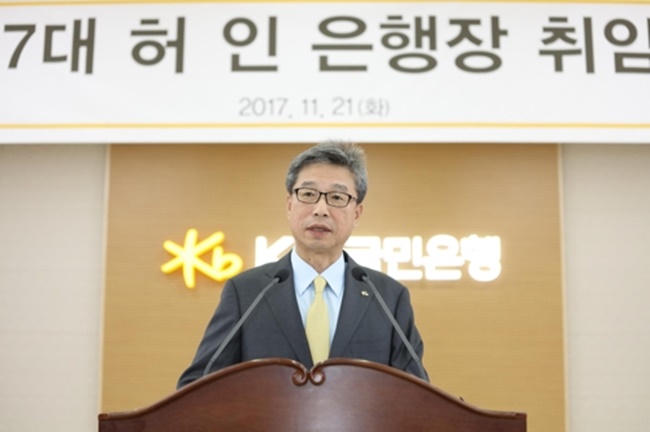 After integrating some redundant branches, KB Kookmin Bank currently operates 1,061 outlets in South Korea, down from 1,130 at the end of last year. The bank has reduced its workforce to 18,110 from 20,622 during the same period, the bank said.

“In the past two years, we have had our outlets focus on their major businesses, such as asset management, corporate loans and foreign exchange deals under the ‘partnership group’ program,” KB Kookmin Bank President and Chief Executive Hur Yin said in a press conference.

Next year, the bank expects the partnership group (PG) program to be established and contribute to its bottom line. Under the PG program, a given number of outlets in a certain district will flexibly and strategically cooperate on sales and workforce operations, the 56-year-old veteran banker said.

In the short term, KB Kookmin Bank will focus on improving productivity and increasing margins by seeking “cost effectiveness, not cost reduction,” Hur said without elaborating.

As KB Kookmin Bank is determined to transform itself into a “digital bank” in the coming decade, however, the president hinted there will be “a certain level of reorganization” at the bank in the number of outlets and workers in the mid- to long term.

As for the bank’s overseas businesses, the president said KB Kookmin lags behind its domestic rivals but will make a concerted effort to make amends and catch up.

“In the advanced markets, we will focus on extending corporate loans and providing investment banking services. In the emerging Southeast Asian markets, we will put a priority on offering retail banking and microfinance services to local customers,” Hur said.

Outside the country, the bank operates branches in five countries, has set up local business entities in four countries and has opened offices in three countries.